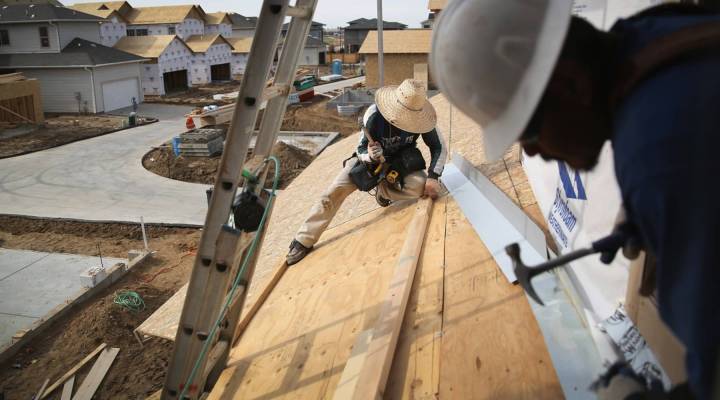 A report from the U.S. Department of Labor on job opportunities and labor turnover, or JOLTS, showed there were more reported job opportunities than unemployed people in May. This suggests that the economy is dealing with a labor shortage, but that raises the question of where these workers will come from when current U.S. immigration policy is reducing the amount of immigrant labor.

We put that question to labor economist Giovanni Peri, head of the economics department at the University of California, Davis.

Below is an edited transcript of his conversation with Marketplace Morning Report host Sabri Ben-Achour.

Giovanni Peri: I think that the idea that if we don’t get immigrants in then this will push wages up is not really supported by the recent experience in the labor market in the U.S. There is a problem of wage growth, especially for low-skilled workers in the sense that wages have not grown very much in the last two decades. But the reason for that, economists argue, are more [about] the changing nature of jobs — mechanization, computerization [and] offshoring, rather than the local force of demand and supply. You’re right in saying that right now there is a very strong labor demand. And if companies cannot find the workers to fill those jobs, this will likely result in slower growth and less creation of future jobs. Wages normally reflect the productivity of workers, so to increase the wages of workers, we probably need to continue increasing productivity of workers, so improving schooling and improving the working conditions will help. But there is no evidence that keeping the supply of workers short will increase wages, especially of low-skilled workers whose number has been actually declining in recent decades but whose wages have not grown. The very tight immigration controls and the current policy is not going to help wages and is probably going to slow down the growth in employment and of the overall economy.

Sabri Ben-Achour: If businesses continue to be unable to fill positions does that stifle economic growth?

Peri: It does. Especially if these positions are professional scientists, engineers [and] high-tech type of jobs. In the last 20 years, the largest inflow of immigrants has been in highly technical, highly professional jobs. These group of workers is really needed for companies to grow because they are the one to introduce innovation [and] technological progress. They allow a company and a firm to expand to be more productive. And when they are hired, the firm will need other type of workers as well: managers, sales persons [and] accountants. So constraining that part could put definitely a big constraint there and slow down the growth of companies and of the whole economy. Also those type of jobs create good income, which is then reflected into higher demand for consumption in the United States, which further stimulates the economy and job creation [and] labor creation.

Peri: I would say that immigration policies in the United States have been almost completely separated from the economic needs of the U.S. economy. The biggest and the only really substantial change in immigration policy in the last 30 years, I would say, has been the introduction of the H-1B visa program in the 1990s, and this is the program that brings in highly skilled professionals which are now so much needed by high-tech companies but also by universities [and] lab research centers. This program as been, in fact, reduced in numbers since 2001 and there has been no response to the growing economy in terms of what type of workers and how many workers we have brought in. I would say that one glaring example is what happened in the ’90s and early 2000s. In this period, the American economy has created a lot of jobs and a lot of demand, even for relatively low-skill jobs in the construction sector, in agriculture and in personal services [like] home services. And in this period, there has been no visa or no legal way of entry for a low-skilled worker to come and do these jobs even if American companies were looking for them. And this has been part of what has created this very large number of undocumented who were coming in to do exactly those jobs. And so you could argue that the enforcement policy in the United States, which has essentially been very tolerant in the ’90s and early 2000, has been a way of dealing with the fact that the immigration policy was not keeping up but the economy was really demanding many more of these people.

Ben-Achour: That’s interesting though, you’re saying the flows of immigrants have followed what the economy has sought to absorb. But policy hasn’t followed along with suit with that. If we were to set aside the humanitarian rationale for accepting immigrants, the ideological rationale, you know, that America is a country of immigrants, if we were to set all that aside and devise an immigration policy based purely on the economic needs of the country, what would it look like right now?

Peri: I think it would look like policy which would allow people to come in if there are American companies that are willing to hire them. They would allow people who study in the United States whose number has increased dramatically, who go to college, to find, if they find a job in the United States, to stay. It would imply that a lot of the undocumented workers who are filling a crucial niche in the U.S. economy, such as construction, agriculture or personal services, need to find a reasonable way to keep their job and have a legal status. And we should be thinking in the future that we want to continue, if not to enlarge the ability of highly skilled to come and drive and push the American economy, but also find some legal ways for low-skilled worker who do jobs that Americans are moving out of very fast. But the American economy is still demanding, as I said, manual jobs in construction, in agricultural and in personal services in particular. We should find a way and a program that allow a certain number of these low-skilled workers to come in as long as they have jobs. So fixing the undocumented problem, finding a legal way to increase the number of skilled workers and allowing a reasonable number of unskilled workers to come in should be the policy that we are discussing right now.