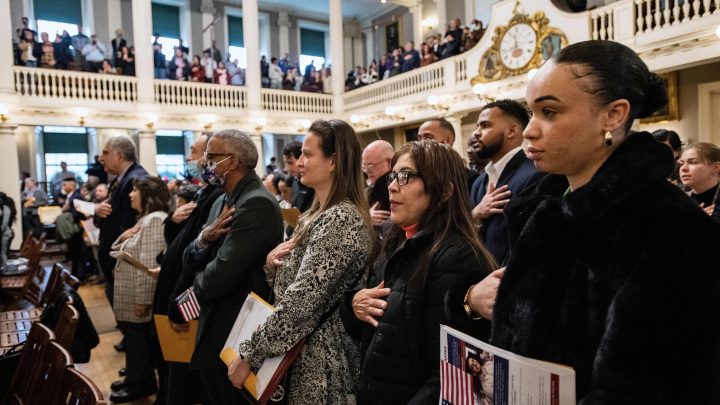 Has the drop in immigration contributed to inflation?

COPY
Immigration to the U.S. dropped dramatically during the pandemic. Above, new U.S. citizens at a naturalization ceremony in Massachusetts on Jan. 5. Joseph Prezioso/AFP via Getty Images

Has the drop in immigration contributed to inflation?

Immigration to the U.S. dropped dramatically during the pandemic. Above, new U.S. citizens at a naturalization ceremony in Massachusetts on Jan. 5. Joseph Prezioso/AFP via Getty Images
Listen Now

A shortage of workers has been one of many economic trends that’s emerged during the pandemic. One contributing factor was a drop in immigration. Immigrants have accounted for a major share of labor force growth for many years, and some experts say their absence contributed to the inflation the country has been grappling with.

Half the growth in the labor force since the year 2000 has come from immigrants, according to Mark Regets, a senior fellow at the National Foundation for American Policy.

“They actually became more important during the pandemic,” he said. “They have been all of the labor force growth over the last three years.”

But that labor force has stalled. Early retirement among Americans generally was one big cause; a fall in immigration was another.

“We saw some restrictions on immigration during the Trump administration, but immigration really fell when the COVID-19 pandemic hit,” said Julia Gelatt, a senior analyst at the Migration Policy Institute. “And the number of legal immigrants coming to the U.S. fell by half between 2019 and 2020.”

There are still backlogs in processing immigration applications. And there are still 10.5 million job openings for only 6 million unemployed people.

Estimates vary on just how many workers the country lost because of the slowdown in immigration. Giovanni Peri, an economics professor at the University of California, Davis, and a colleague tried to calculate it.

Not all of those immigrants would be working, Peri added, though most — around 80% — probably would be. Goldman Sachs analysts had slightly different estimates; they figure that by April 2020, the U.S. was short 2.8 million foreign-born workers and that the gap shrunk to 1.2 million in March of 2022.

And this gap contributed to the inflation we’re seeing, Mark Regets added.

“Inflation occurs when you have demand for goods and services growing faster than their production,” he said. “Immigrants do buy things. They also do an awful lot to increase production, and that keeps inflation lower.”

As recently as November, Federal Reserve Chair Jerome Powell said that a drop in immigration had contributed to the tightness in the labor market. Recent data shows the situation may be easing, though.

“We have seen both a recovery in legal immigration — people getting visas to the United States — we’ve also seen really high numbers of people coming across our southwest border who can get work authorization if they apply for asylum and wait a certain period,” said Gelatt at the Migration Policy Institute.

Inflows of refugees from Afghanistan and Ukraine have also added to immigration numbers. All of this together may, she said, compensate for the shortfall in workers the U.S. suffered during the pandemic.