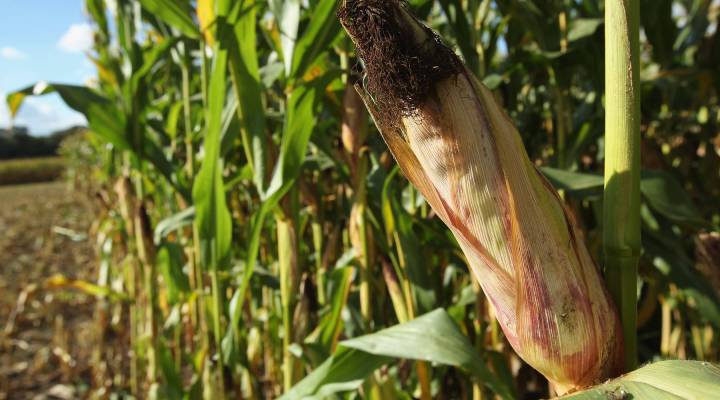 Corn prices plummet, will the price of Cheerios?

COPY
Corn prices are tanking amid stuffed silos and plans for the country’s biggest planting in decades. Sean Gallup/Getty Images
Food and Drink

Corn prices plummet, will the price of Cheerios?

Corn has been making headlines this week, ever since the U.S. Department of Agriculture announced a surprise corn surplus.

Turns out we have a lot more corn than we thought we did — 400 million bushels more. That news hammered prices, says Ryland Maltsbarger, principal economist of the agricultural services division at IHS Global Insight.

“Extra supply on the market was shocking to the traders, so that’s why we saw that dramatic drop in price,” he says.

Corn prices fell by more than 10 percent the first three days of this week, and are more than 20 percent lower than the highs last summer, when drought devastated the Midwest’s corn crop. That pricey corn had people looking elsewhere for cattle feed and cutting back on ethanol, says Martin Foreman, senior economist at Doane Advisory Services.

“We’ve seen the demand side of the corn soften up here over the last six months,” he says.

At the same time, corn’s high price prompted farmers to plant more of it. This year’s corn crop, more than 97 million acres, is the biggest since 1936. Add that to the corn stockpile, and prices should stay low, Foreman says. That’s good news for consumers.

“Eventually it will translate into some lower prices, probably most significantly it will impact meat,” he says.

Especially, beef. But not in time for this summer’s BBQ. Foreman says it takes time for market prices to trickle down to the supermarket.