A judge has halted the ban on sugary drinks over 16 ounces, set to go into effect in New York City. New York Supreme Court Judge Milton Tingling wrote that the regulation was “fraught with arbitrary and capricious consequences.”

New York Mayor Michael Bloomberg had pushed for the ban, and city government is set to appeal the ruling.

Some local businesses shared the judge’s concerns. Others saw an opportunity. Managers at Frames Bowling Lounge, in Manhattan, have spent the past week taste testing freshly squeezed juices as an alternative to pitchers of soda.

“I think that having alternatives to soda means that people might choose that over soda,” said Frames marketing manager Frayda Resnick. “The reason why restaurants are excited to serve soda to begin with is because of the potential markup. But if the potential markup is there with the juice as well, restaurants can offer this … and pass on the savings to the customer.”

That juice will cost $1-$2 more than a soda, in the range of $4-$6 for a pint glass of juice. Flavors include apple-beet juice with a cinnamon swizzle stick. However, with the ban on hold, the pitchers of soda will continue to flow. 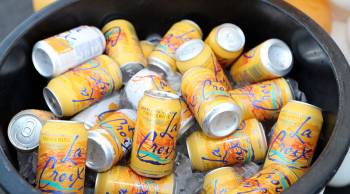