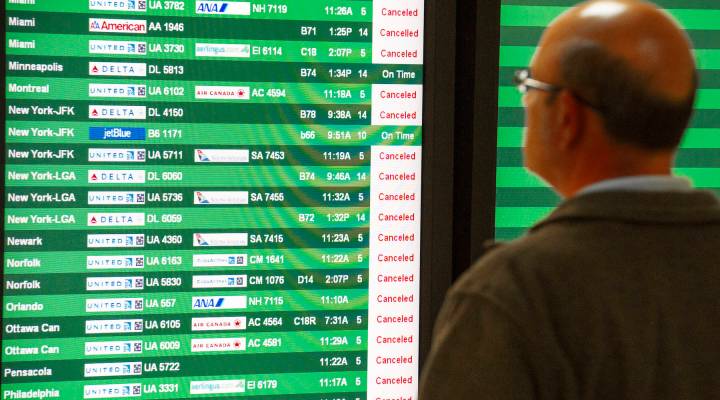 Returning to the skies after Sandy

Returning to the skies after Sandy

Airports all up and down the East Coast are closed today, as the region recovers from Hurricane Sandy. Major hubs like Newark, JFK and LaGuardia have been closed for two days now, and hundreds of thousands of passengers have been stranded. More than 14,000 flights were canceled yesterday and today as well, which means planes aren’t where they’re supposed to be, crews aren’t where they’re supposed to be and passengers are all over the place.

“You have the unusual circumstance of the disruption of essentially all the East Coast,” Mann says. “That affects both international flights as well as domestic hub activity.”

And those aren’t the only challenges for the airlines. Curt Grimm teaches supply chain management at the University of Maryland. He says the airlines have cut so much fat out of the system, when something goes wrong, it’s hard for them to be flexible.

“All slack in the system has long since been eliminated,” says Grimm. “That’s one of the factors that makes it so difficult for them to rebound.” Grimm says another problem is that airlines have cut flights and now planes are typically around 85 percent full, so it can be hard to find room for displaced passengers.

Bob McAdoo is an airline analyst at Imperial Capital. He says the real issue in getting planes back in the air, is on the ground.

“So many of the people who work at the airport need public transit to get to work.” he says. “The airport maybe open for flights, but if the TSA can’t get all of their people out there to work, they’re not going to let any passengers on a flight.”

Right now officials estimate it could be weeks before New York will have regular subway service again.