Laid-off teachers look for their Plan B

Laid-off teachers look for their Plan B

Sarah Gardner:Thousands of teachers are notheading back to school this week. Budget cuts have hit one of this country’s largest professions especially hard. In the last three years, more than 300,000 education jobs have disappeared. And that’s left a lot of people working on their Plan B. Former technology teacher Chris Bjuland found his at the airport.

Chris Bjuland:I was working as a teacher in the Archdiocese of San Francisco, and I got called down to the principal’s office one day between classes, and he said, “Well I’m sorry to do this, but we’ve had some budget problems and so we’re going to have to let you and all the part-time teachers go.”

I did look for other teaching jobs. After about a year of really trying and seeing how frustrating it was, it was time to open up the horizons.

One day while flying out of the San Francisco airport I saw the SFO airport museum. I got on their website and thought, “Well maybe I could do something with them.” So I wrote them a letter and then it just went from there. I got hired on as a part-time person and that’s where I’m at right now.

I’m earning less than I was as a teacher — a lot less. But you know, you do what you can to survive.

What I miss is working with the kids. I miss seeing that smile on their face when they get something and saying, “Hey, I contributed to this and this person is going to go on and do good things and I helped with that.”

I’m married and so we live on double income, but no, it’s not a job that would allow me to pay all my bills.

One of the nice things about it, which was a little bit different than teaching, is people treat me with respect and they want to know what I know. They value what skills I have and I’m not afraid to go to work. I’m not afraid to say, “Hey, I don’t know how to do something.” Everybody’s there on the same side.

Gardner: Thanks to Amy Scott for producing this piece. For more tales of teachers after teaching 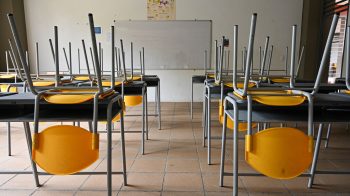 For this schoolteacher, the pandemic was a turning point