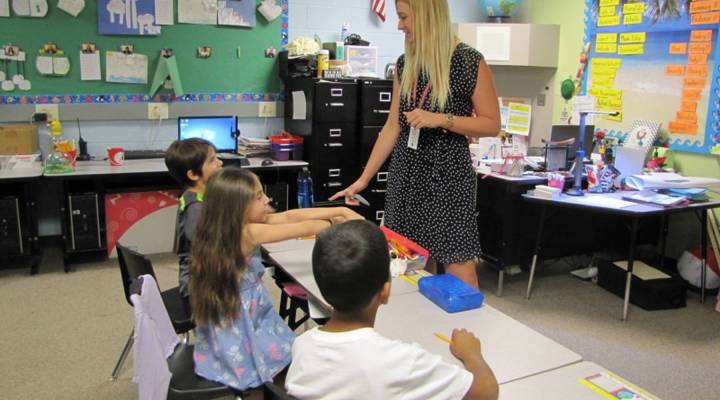 COPY
School administrators say it's now a teacher's market in Arizona. So for soon-to-be teachers like ASU student Kristen Fisher, the prospects of finding a teaching job are very good.  Carrie Jung/KJZZ

School administrators say it's now a teacher's market in Arizona. So for soon-to-be teachers like ASU student Kristen Fisher, the prospects of finding a teaching job are very good.  Carrie Jung/KJZZ
Listen Now

If you drive due east out of Phoenix for about 3 hours, you’ll eventually hit Thatcher, Arizona. Many people in this rural town make their living farming or mining. Teachers, however, are hard to find.

“We always need math and science,” said Carol McAtee, the principal at Thatcher High School. “The vocational courses, those are getting harder and harder to fill.”

She said finding and keeping good teachers is a challenge, especially in rural Arizona, for a lot of reasons. But McAtee explained much of it boils down to one, really glaring issue.

“Our salaries are certainly less than what teachers can get in the Phoenix and Tucson areas,” she said. “And of course when you compare that to other states, Arizona is at the bottom.”

According to recent figures, Arizona teacher salaries rank among the lowest in the nation, at about $45,000 per year.  School officials are trying to fill an estimated 2,000 open teacher positions this year. A lot of teachers here get poached by neighboring states like Nevada where salaries are higher. McAtee wishes she could match those numbers, but her budget is already stretched.

Faced with a challenging situation that’s not likely to go away any time soon, officials across Arizona are having to get creative when trying to fill their open teaching jobs. In Thatcher, a new teacher training program known as iTeach is showing some promise.

“Ok, fourth hour, our class average was 86.5. What is average again?” said Aubrey Larson, a student teacher from iTeach, to a class of ninth graders.

The program was created by Arizona State University. The teacher’s college there has been opening satellite four-year degree programs in rural community colleges. The goal is to attract students who can’t fit a three hour drive to the closest university into their schedules. The logic: If you’re from a rural town, you probably have deep roots there and you’re more likely to want to stay, which is the case for Larson.

“My husband is a cotton farmer so he farms here and both of our families are here,” she said. “So there’s no plans of leaving. We love it here.”

Down the road a bit, officials in Casa Grande are working with a more international solution. After striking out at job fairs both in and out of Arizona, Superintendent, Shannon Goodsell said he was forced to look outside the country to fill jobs. He now brings in certified teachers from the Philippines.

While Arizona’s teacher salaries are low, they are at least five times higher than the Philippines.

“The sum of money is good if you’re going to convert that to our Philippine peso money,” said Lily Viclimbaga, one of the 14 Filipino teachers now working in Casa Grande. “But then, it’s just secondary. Our main purpose is to grow professionally.”

Teachers Lily Viclimbaga and Riza Casabuena are among teachers from the Philippines who work at Casa Grande Union High School.

But while these two schools have found a way to get certified teachers into classrooms, Justin Wing, the president of the Arizona School Personnel Administrators Association said, with such a shortage, most are resorting to things like larger class sizes and long term subs.

“Individuals with no experience teaching,” he explained. “Most, if not all, have degrees, of course, but it may be in a different field.”

On the flip side, if you actually want to become a teacher here, you’re pretty much guaranteed a job.