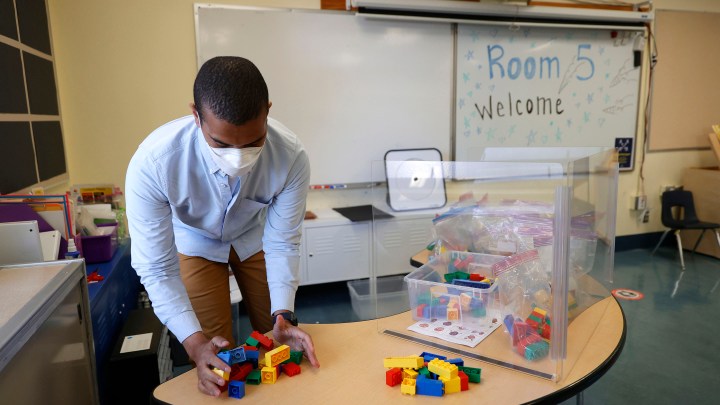 COPY
Because of remote learning and $190 billion in federal aid, there haven’t been massive teacher layoffs. But stress and burnout could push people from the field, one education researcher says. Justin Sullivan/Getty Images
COVID & Unemployment

Because of remote learning and $190 billion in federal aid, there haven’t been massive teacher layoffs. But stress and burnout could push people from the field, one education researcher says. Justin Sullivan/Getty Images
Listen Now

Despite hiring and unemployment numbers moving in the right direction, with hotels, restaurants and other in-person service businesses reopening to more and more vaccinated consumers, the U.S. is actually looking at a labor shortage now. And there’s also another big employer looking to replenish its workforce: public schools. But it’s not going to be easy.

Eighth-grade math teacher Melanie Passovoy is extremely happy to be back in her classroom. It’s much easier to teach geometry there than rearrange the geometry of her living room for distance learning.

“So at home, I had a standing whiteboard that would take up like half the frame,” Passovoy said. “And then there would be this like narrow section next to me where you could still see my kids or my cats or my husband coming in and out.”

Folsom Middle School in suburban Sacramento went hybrid in March, not a moment too soon for Passovoy. A year of telling her daughter she couldn’t watch Netflix in the background while Mom taught the Pythagorean theorem was starting to wear her out.

Some of her colleagues, though, were just done. “I definitely know some teachers who retired at the beginning of the school year who were not intending to retire,” she said.

That’s not likely to let up this year, said Chad Aldeman, an education researcher with Georgetown University. Younger teachers may also be more inclined to leave and even switch career paths entirely.

“They are more likely to leave this year if the economy is strong, if they’ve been tired and stressed out at work and just need a break,” Aldeman said.

That could make an already a severe teacher shortage even worse. Overall, schools were down nearly 600,000 jobs in March from pre-pandemic levels.

However, most of those actually aren’t teachers. Because of remote learning and $190 billion in federal aid, there haven’t been massive teacher layoffs. But, “whenever a school district needs to make cuts, the very first place they look is the food service workers and the custodians and the secretaries and all of those people,” said Ben Valdepeña, president of the California School Employees Association, a union that represents most of the non-teachers who work for schools.

The good news: Those jobs are gradually returning, as schools reopen. One area where hiring is really heating up? “You will see school districts within the state of California right now, and nationally, that are hiring more custodians,” Valdepeña said.

All the extra cleaning for COVID is a job creator.