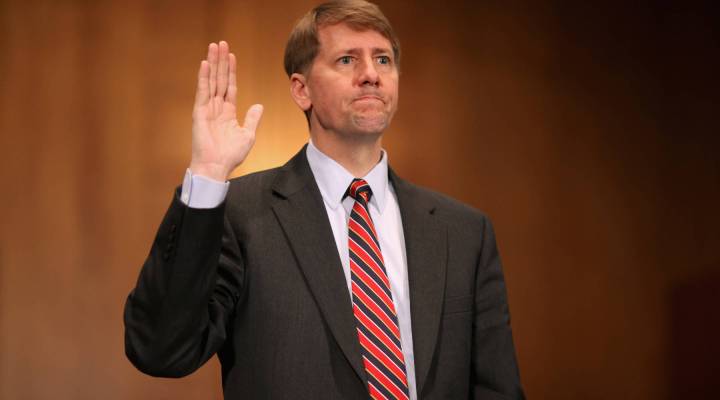 COPY
Richard Cordray, seen here swearing in at the beginning of his confirmation hearing in Sept. 2011, as director of the CFPB. Chip Somodevilla/Getty Images

Richard Cordray, seen here swearing in at the beginning of his confirmation hearing in Sept. 2011, as director of the CFPB. Chip Somodevilla/Getty Images
Listen Now

If you have ever had to deal with an error on your credit report or even tried to figure out where all that information came from, you know that it’s a difficult process. But it may soon improve. On Monday, the head of the Consumer Financial Protection Bureau announced that agency would start overseeing Experian, Equifax, Transunion, and more than two dozen other credit reporting agencies.

In an interview with Marketplace Money host Tess Vigeland, CFPB Director Richard Cordray discussed the goals of the bureau’s new mandate and how it would be enforced.

“I would say our goal here is to make sure the credit reporting market works for consumers,” Cordray said.

Cordray identified three main areas of focus. First, ensuring that the information that comes from mortgage lenders and debt collectors be accurate to start. Second, ensuring that credit agencies don’t introduce inaccuracies in the process of assemblying a consumer’s credit history. Third, when you have an inaccuracy in your credit report — the case for as many as 40 percent of all credit reports — it should be easier to get it fixed.

The process is currently complicated and difficult, Cordray said. “That doesn’t seem right for the consumer.”

So has Cordray ever had an error expunged from his credit history?

“I have not,” he said. “Although I have checked my credit history pretty regularly and I urge everybody out there to do that because it’s the best way to protect yourself against idenity theft or mistakes that may creep into your report for any number of reasons.”