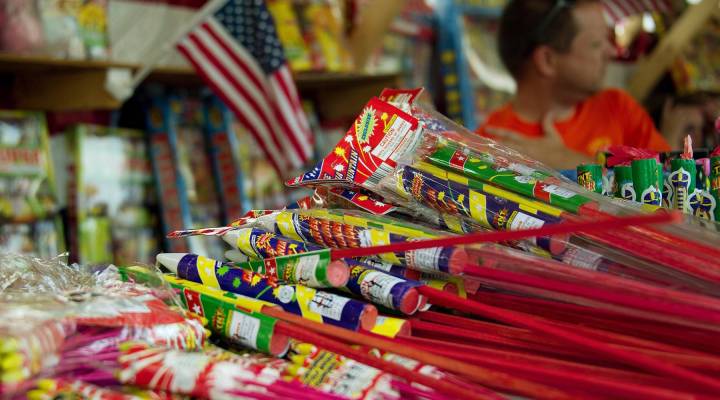 COPY
As the U.S. Independence Day holiday approaches, fireworks rest on the counter for sale at the stand in Washington on July 3, 2012. JIM WATSON/AFP/GettyImages
Mid-day Update

As the U.S. Independence Day holiday approaches, fireworks rest on the counter for sale at the stand in Washington on July 3, 2012. JIM WATSON/AFP/GettyImages
Listen Now

U.S. markets will be closed today for the Fourth of July, but here are some numbers people are going to be very focused on instead: 101. That’s today’s high temperature in Chicago; 94 degrees in New York City; 104 in Kansas City. Looks like the heat plus predicted storms do not bode well for a lot of Fourth of July plans.

One measure of consumer debt is at the lowest level in five years. The American bankers association says the proportion of consumers with overdue payments on credit cards, auto loans and other debt.

The world’s most popular and probably most valuable soccer team is filing for an IPO — here in the United States. Manchester United — based in Manchester, in the U.K. — has filed for an initial public offering on the New York Stock exchange. ManU is owned by American businessman Malcolm Glazer, who also owns the Tampa Bay Buccaneers. The club hopes to raise 100 million dollars through the IPO.

In Narrowsburg New York they’re cancelling the fireworks because of eagles. Bald eagle nests are too close to the fireworks zone — so says the U.S. Fish and Wildlife Service. Between two symbols of American independence day, the eagles win this round.

Finally — in France, a new law just went into effect that adds to the required safety equipment drivers have to carry in their cars. All French drivers must now carry an on-board breathalyzer. Drivers who think they might be over the limit are supposed to test themselves. The hope is that by sacrificing a little bit of French “liberte,” the requirement will save 500 lives a year.