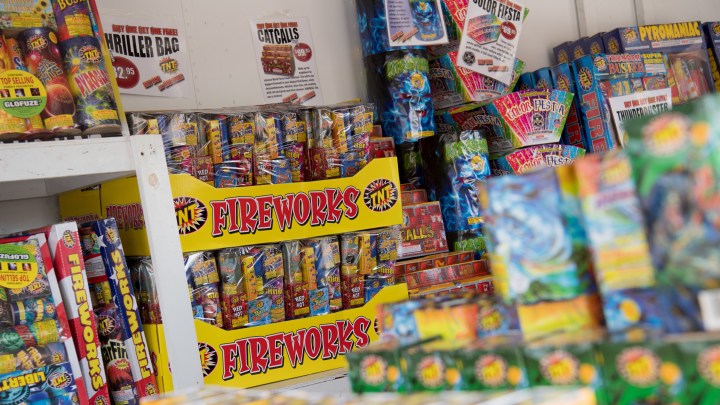 COPY
During the height of the pandemic, consumer fireworks sales got a boost from people who stayed home for the Fourth of July. Saul Loeb/AFP via Getty Images

During the height of the pandemic, consumer fireworks sales got a boost from people who stayed home for the Fourth of July. Saul Loeb/AFP via Getty Images
Listen Now

It might go without saying that with inflation chugging along at above 8% by some measures, this year’s Fourth of July barbecue is turning out to be more expensive than last year’s.

Prices have also increased for the evening’s climax: the fireworks. As you can imagine, this is go time for the fireworks industry.

“There is no Fifth of July in our business,” said Bill Weimer, vice president at Phantom Fireworks, which has stores in 15 states.

He said that 90% of his sales occur in the month leading up to Independence Day; the rest mostly center around New Year’s and Diwali, which is celebrated mainly by the people of India. This year, the product is more expensive.

And that’s mostly down to shipping. Most fireworks come from China, and Weimer said shipping costs have quadrupled. That’s on top of the premium the industry already pays because its products are explosives.

Inflation is also affecting local fireworks shows, per Michael Cartolano at Pyrotecnico, a fireworks display company. Those can cost anywhere from $10,000 to whatever you’re willing to spend.

“This is a bad phrase, but I’ll say the sky’s the limit,” Cartolano said, adding that towns are trimming costs by shortening shows. A 25-minute display might become 20 minutes.

But price increases aren’t putting too big a dent in the industry, said Steve Houser, president of the National Fireworks Association.

Cities that canceled public shows for the past couple of years because of COVID-19 are eager to bring back the tradition. And during that time, consumer fireworks sales got a boost.

“A lot of people were like, ‘Well, I can’t go to the city show, so I’m going to try fireworks in my backyard,'” Houser said.

He also thinks that, with the price of gasoline where it is, people figure that if they’re going to stay home on the Fourth, they may as well go all out.