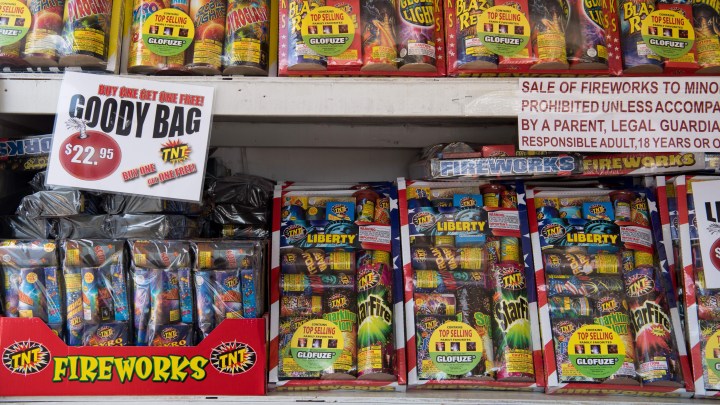 COPY
The term "safe and sane” refers to fireworks that are considered less likely to cause injury or start fires. Saul Loeb/Getty Images

The term "safe and sane” refers to fireworks that are considered less likely to cause injury or start fires. Saul Loeb/Getty Images
Listen Now

Massachusetts is the only state where you can’t legally buy consumer fireworks, despite the Independence Day tradition.

But a number of states, counties and cities are limiting what you can buy to “safe and sane” fireworks — in other words, those that don’t leave the ground. Those fireworks have been penetrating the market as wildfires become more prevalent and devastating.

The term “safe and sane” was popularized in the 1950s and ’60s to describe fireworks that were thought less likely to cause injury or start fires.

That category has grown popular amid wildfire concerns and for customers who are dealing with inflation, Fuller added. “They’re far, far cheaper devices, so your dollar for value goes a lot further.”

That said, traditional products still make up the majority of sales for fireworks companies like TNT.

Now, those safe and sane products “may be safer, but it’s still playing with fire,” said Jennifer Balch, a fire scientist at the University of Colorado, Boulder.

“I really do think now’s the time to think about different ways to celebrate that don’t carry the risk of starting a wildfire.”

Her suggestion: a laser light show.