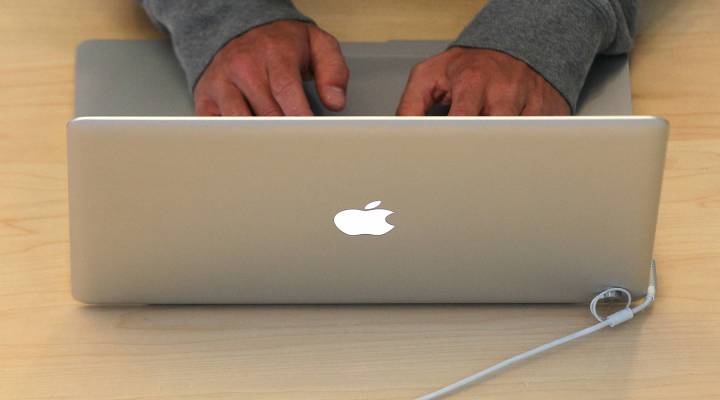 Kai Ryssdal: If you’re booking summer travel plans on a Mac computer, you might end up spending more than if you just used a regular ol’ PC. The Wall Street Journal reported this morning the travel site Orbitz has noticed that people using Apple products spend up to 30 percent more on hotels. So Orbitz has started showing them swankier digs when search results come back.

All kinds of companies are drawing correlations like that based on brand loyalty. And Marketplace’s Stacey Vanek Smith reports, we ain’t seen nothin’ yet.

Mac Ad: Hi, I’m a Mac, and I’m a PC. What do you have there? I was just looking at this photo book I made in iPhoto.

Stacey Vanek Smith: Maybe of the fancy hotel he stayed at on a recent trip. David Evans is the president of Psychster, a digital media research and consulting firm. He says Orbitz offering fancier hotel options to Mac users shows…

Evans says he’s surprised its taken this long for companies to exploit all of the data they’ve been collecting on us. And there’s still a long way to go.

Evans: On Facebook, they know that I live in Seattle, I fly-fish in Jackson Hole and me and all my friends are raising kids.  And yet, what are my ads I’m getting? Switch to Verizon, which I’m already on, get ripped and fly to Milwaukee.

No offense to Milwaukee. James Fowler is a professor and social networks expert at the University of San Diego. He says many companies are just now starting to figure out how to put their data to work.

Fowler says companies are using algorithms to create groups of customers, based on, say, a few different products they know we like, to accurately predict what we might buy next.

Fowler: Like people who like Diet Coke and Hagen Daaz and Nascar, and we’re going to be able to figure out exactly what to show those people online before they even knew they wanted it.

Fowler says politicians have been using this technique for a long time. Arnold Schwarzenegger famously targeted Coors Light drinkers. George W. Bush went after Nascar dads. Maybe Obama and Romney should go after Mac users. They do seem to have a little extra money.