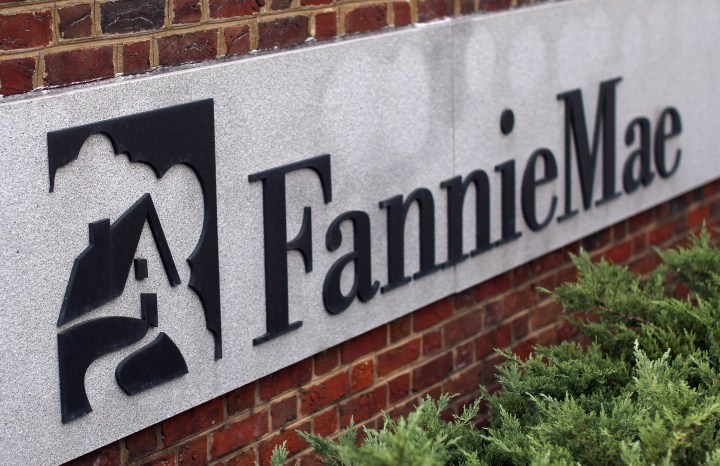 One of the priorities of the Donald Trump administration was to finally return Fannie Mae and Freddie Mac to private hands. The two companies, which back roughly half of all mortgages in this country, have been under government conservatorship since they nearly collapsed in the financial crisis of 2008.

Now, it seems that effort has been all but abandoned. In a statement late Thursday, federal regulators said they would leave the companies’ current shareholder structure pretty much intact.

It’s hard to overstate the importance of Fannie Mae and Freddie Mac to the mortgage market.

“These are two institutions that, between the two of them, hold about $6.6 trillion in obligations behind the mortgage-backed securities around the globe, the second-largest currency next to the U.S. Treasury,” said David Stevens, CEO of Mountain Lake Consulting.

That’s partly why the administration and the companies’ top regulator, Federal Housing Finance Agency Director Mark Calabria, wanted them back in private control, said Kevin Erdmann, a fellow with the Mercatus Center at George Mason University.

“There’s concerns obviously going back to the financial crisis that they represent a lot of taxpayer risk,” he said.

The pandemic changed the equation. With millions of people unable to pay their mortgage bills and delinquencies on the rise, Erdmann said, this is not the time to mess with the system.

“If the worst-case scenario somehow happened and there was this new mass-foreclosure event, it probably is best to sort of have that backstopped by the federal government,” Erdmann said.

Regulators will allow Fannie and Freddie to hold onto more of their profits. The goal is to eventually build enough capital to protect against losses that they could stand on their own.

But the incoming administration of Joe Biden is more likely to focus on how Fannie and Freddie can advance a broader agenda — to promote affordable housing and homeownership, said Jim Parrott, a fellow with the Urban Institute.

“That may eventually involve their release from conservatorship, but it may not,” he said. “It almost certainly won’t involve it happening over the near term.”