Kai Ryssdal: There are, plus or minus, 7 billion people now living on this planet. By the middle of the century, the United Nations tells us it’s gonna to be 9 billion. Among the many, many questions that raises is how we’re gonna feed them all. The answer is complicated — a mix of politics, culture, science, and traditions all affecting the global food supply.

Here’s part of the science. The average person drinks a couple of quarts of water every day, but it takes more than a thousand times that to produce a day’s worth of food. That’s a problem everywhere, but especially in India, where scientists say nearly a third of that country’s underground aquifers are already in critical condition and worry that the country is headed for a full-blown water crisis.

Today on our series “Food for 9 Billion,” Jon Miller went to India to meet a man who’s trying to do something about it.

Jon Miller: Rajendra Singh lives in a patch of forest hours from anywhere in the dry hills of eastern Rajasthan. It’s dark when I get there. We eat dinner on the ground by an open fire, then he leads me to his office, lights a candle, settles on a mattress and tells me how he came to be famous as the “water man.”

Rajendra Singh: When I came here I don’t know about the water management, I don’t know the water engineering. My background is in the medical science.

This was the 1980s, and Singh had recently finished a degree in traditional Indian medicine. Inspired by Gandhi, he decided to move to the poorest, driest, most godforsaken place in his area and build a health clinic and a school.

Singh: After seven month, one old man told me, Rajendra, we not need medicine and education. We need water. Without water we can’t survive.

But Singh knew nothing about water. So he asked the old man what he should do. And the old man told him he should do what folks here used to do — build a little dam to catch the rainwater that comes during the short, but intense annual monsoon.

Singh: So I start digging!

And kept digging — for four years.

The water shortage back then was a sneak preview of the crisis India is facing today. For decades, the government had encouraged individual farmers to dig wells to tap into the groundwater. More than 20 million did. Food production went way up and the water level went way down. In dry places like this, it wasn’t long before farmers couldn’t reach it. Villages emptied out. The social fabric started to fray.

Singh: When I came here, just old women and old man and some child living here. Because no water.

Not that it never rained. It just all came at once, and most of it ran off. Rajendra Singh finally finished digging his pond just in time for the monsoon.

Singh: And my structure full with water.

Not only did the pond fill up, but the wells nearby started to fill. The dam wasn’t just storing the water on the surface; it was sending it back into the ground, recharging the aquifer. It was just one pond, about three-and-a-half acres, but it was greening 500 acres around it. People from neighboring villages came to see.

Singh: So the wonderful thing is, in the fifth year, more than 30 villages start the work. The next year, in 200 villages.

Today, he says, more than 1,200 villages have built more than 10,000 rainwater harvesting structures over an area larger than the state of Delaware. Seven rivers that were dry most of the year are now flowing year-round. Farmers are back, there’s plenty of food, and Rajendra Singh is the best-known figure in what’s become a national grassroots rainwater harvesting movement.

The next morning, Singh shows me around the rustic campus he’s built as a sort of water education center. Peacocks and monkeys live in a forest that didn’t used to be here. Singh is in his early 50s, with a broad face and a mostly-white beard. When he’s excited, which is a lot, you can see the whites all around the irises of his eyes.

Singh: Yes, it is the completely arid area, no grasses. No tree! No moisture! But now, beautiful tree come up! Beautiful grasses coming up! Very healthy soil. And we are also healthy!

I can see the changes when I head out with Singh to look at projects. The valleys are green with fields of mustard in yellow flower. Villages are full of kids — both human and goat. Around noon we stop at a stone and concrete dam almost 150 yards long, built by villagers with little outside help.

Singh says rainwater harvesting is only part of the reason this area is back from the brink. He’s also fought to keep out water-guzzling industries, like breweries and mines. He’s convinced villagers to plant trees on the hillsides, and to change the way they manage their crops — in some cases burying pots with holes in them to deliver water to plants drip by drip.

Singh: Water harvesting is not the solution, but water conservation and community-driven, decentralized water management is the solution for my country.

All of which makes perfect sense to Sanjay Pahuja, a water expert with the World Bank. He says rainwater harvesting has been great, especially for raising awareness. But the more urgent work is on reducing demand.

Sanjay Pahuja: You have a bucket with a big hole in it. You shouldn’t be going around, running around the landscape trying to find more water to keep that bucket full. You fix the leak in the bucket.

He says that can be done mainly with existing technology, like drip irrigation, or leveling fields, or just planting crops that need less water.

Pahuja: If we look at the gap between supply and demand in 2050, 80 percent of that gap can be closed purely by these improvements — which are going to increase water efficiency on the farms, without doing anything else.

For Pahuja, the biggest challenge is scaling up. Which doesn’t necessarily mean thinking big. He says conditions can be dramatically different from place to place, so the key is to let communities take charge. But that takes coordination. With more than 600,000 villages, you can’t count on charismatic personalities like Rajendra Singh to pop up wherever you need them.

Singh now spends most of his time trying to influence India’s water policies. He says there has been progress; official attitudes are starting to change. In the meantime, work continues back home. Late in the day we walk a couple of miles up a dry valley, to the mouth of a steep box canyon. About a dozen men and women are clawing at the earth with picks, carrying metal bowls full of rocks on their heads, dumping the rocks on a pile.

The ground looks hopelessly parched, but a man named Harshaye, age 65, says they’ll be farming here next year. And they’ll have drinking water, and birds, and they’ll build a temple so they can worship by the waterside. Singh beams with approval.

Singh: So this is the change. When I start, that time no hope, my dear. But now, not only hope — confidence.

Rajendra Singh has learned a lot since he arrived here 27 years ago — about water, about geology, about engineering, about politics. He’s also learned that when you’re facing long odds, confidence can be a very powerful tool.

Ryssdal: Our series “Food for 9 Billion” is a collaboration with Homelands Productions, PBS NewsHour and the Center for Investigative Reporting. You can find pictures and other stories by visiting our special collection — “Food for 9 Billion.” 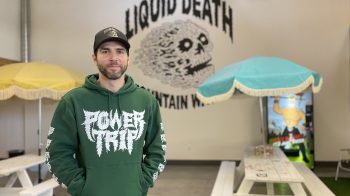 Liquid Death is an “entertainment machine” with a water brand attached