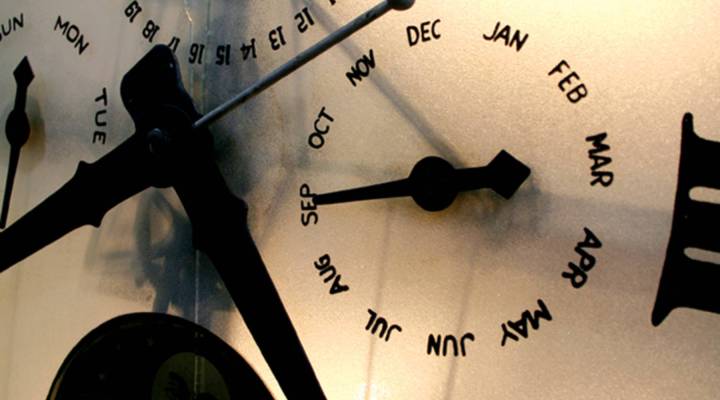 How much patience you have may directly relate to your credit score. iStockphoto

How much patience you have may directly relate to your credit score. iStockphoto

Tess Vigeland: It took Michaelangelo more than four years to paint the Sistine Chapel. “Genius is eternal patience,” he’s quoted as saying. So we can safely assume that he would have had a great credit score. Yes — new research shows that the more patient a person you are, the higher your credit score is likely to be.

Stephan Meier co-authored the study. He’s an associate professor at Columbia Business School and his paper is in this month’s Journal of Psychological Science. Thanks for being with us.

Vigeland: How did you determine whether someone was patient or impatient?

Meier: It’s a little bit… Do you know the marshmallow studies with kids?

Vigeland: Yeah, but let’s go ahead and explain that for our audience.

Meier: It’s like an adult version of the marshmallow study, which is a famous psychology study done in the 70s, where they bring in kids into a room and tell them “Look, here you have a marshmallow. I have to leave now for five, 10 minutes. If I come back and you haven’t eaten that one marshmallow, you get two.” And you see that there are a lot of kids struggle with that. It’s a very tempting thing to eat that marshmallow. The marshmallow is so great. But the really amazing part about that study is about 10 years later, they go back to those kids and check out how good they do in schools. And those kids who waited longer, who didn’t eat that marshmallow, are doing better in school.

And so our study is kind of a replication of that in an adult version and with financial consequences. So we started with saying, “Do you want to have $49 now, or $50 in a month?” So people think about, “OK, is this worth to wait a month for a dollar? No, I take $49 now.” And we say, “Oh OK, great. What about $45 and $50 in a month?” And then we went down and down, and at one point, a lot of people switched. You know when you get down to like “Do you want to have $20 or $50 in a month?” A lot of people said, “OK, it’s wroth waiting that extra month.” And so by confronting people with a couple of those choices, we determined whether people are more or less impatient, and then we look at what consequences does that have one people’s FICO score. And you see that it does and people who are very impatient have lower scores.

Meier: Well, you see, that people are very very impatient fall below the 620 FICO line, which is often used as the subprime threshold, and people who are very patient just make it above that line. And so in that sense, even though the difference in points can be up to 30, 50 FICO points, but because it’s around that threshold, it can have quite substantial consequences on how you get treated on the credit market or the labor market.

Vigeland: Then let me ask you this: You know, in the marshmallow study, when you have five-year-olds, they are in a point in their lives where perhaps you could teach them to have more patience and you can teach them the consequences of not having patience. When you’re looking at adults who have pretty ingrained behaviors when it comes to saving and spending money, how do you change that behavior if you’re an impatient person?

Meier: Well, I have a one-and-a-half-year-old and I sometimes think you can’t teach the little kids anything. But I agree, it’s probably easier than with adults. I still think there are ways where people can — if they want — they can deal with it if they’re aware that they have that problem. You know, I have a lot of problems going to the gym. I know that going to the gym is good for the future. It’s painful now, it’s actually terribly boring, I think. But it has these consequences, not today, but very positive consequences in the future. And I have a hard time doing it, because I’m not that patient. So I have strategies to deal with that: I team up with a buddy, I make it almost automated. Same with finance — I make most of the things I try to automate them so that I don’t have to decide. My fridge is empty, not because I’m lazy to shop, it’s because I know if it’s full, I’m going to eat it. So I think if you’re aware that this is one of your problems and you’re willing to change it, I think there’s strategies around it.

I also think that if you’re a bank, for example, and you want to help people not default, I think knowing that impatience is a little part which drives the decision… I mean, to tell them “Look, if you don’t default for two years, I’m gonna give you a prize.” It’s not gonna work, because that prize gets discounted a lot. Who cares about the prize in two years? So maybe a better strategy is “Look, every month you pay, you get a little prize,” and so basically, the up front benefits might be more effective in helping people to stick with their payment plan and pay their bills.

Vigeland: Wow, so do we have a solution to the foreclosure crisis there?

Meier: I really wish I could. I like the study I have, I wouldn’t generalize it to that we can solve the foreclosure crisis with the results of my study.

Vigeland: Fair enough. Stephan Meier is associate professor at the Columbia Business School. Thanks so much for coming in. It’s been fun.

Meier: Thank you very much Tess.

Why consumer credit is a matter of "social trust"