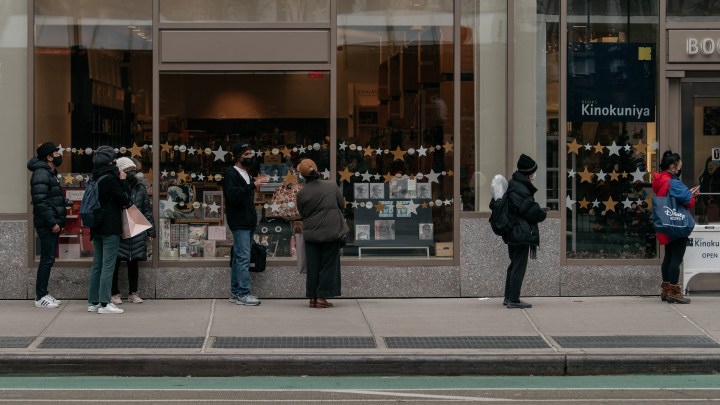 COPY
After a year of standing in line to enter stores, pick up groceries, have our temperature checked, we may be getting better at waiting. But will it last? Scott Heins/Getty Images

After a year of standing in line to enter stores, pick up groceries, have our temperature checked, we may be getting better at waiting. But will it last? Scott Heins/Getty Images
Listen Now

There’s a spot in Brooklyn, New York, that has been one of the hottest places in town for much of the pandemic. Almost all day, people wait to get inside. On a recent day, Lakin Starling was one of them.

“It could be a Tuesday morning and there’s a long line,” she said. “Like unless like Beyoncé’s inside, I’m typically not waiting in a line.”

“It’s a mental exercise for me to get up and come and get groceries, because of the line,” she said, adding that she’s accepted “just having to surrender to the fact that none of this is in our control and be patient about those things.”

We’ve all been doing a lot of waiting these days; waiting for COVID-19 tests, for the vaccine and for this whole horrible thing to be over. We didn’t exactly have a choice. And businesses have been waiting, too.

But now, as vaccines roll out and the economy slowly reopens — and the waiting game feels like it might be headed toward some version of a finish line — we’re in a hurry, according to Ayelet Fishbach, a professor of behavioral science and marketing at the University of Chicago Booth School of Business. “When we think that something is almost over, we become extremely impatient. The surprising effect is as things become nearer, it is harder to wait for them.”

And, despite all the practice at waiting we’ve had, we might find that we haven’t learned much.

“We don’t find that patience in one context is necessarily related to patience in another context,” Fishbach said.

In fact, she thinks we’ve become used to certain things being less of a hassle. Traffic is lighter, almost anything can be delivered with one click and there are open tables at restaurants, even on Friday night.

“Certain conveniences are going to stick with us,” Fishbach said. “We were spoiled, in a way.”

If economists are right and people want to make up for lost time, things could get inconvenient fast. There could be waits for a treadmill at the gym, for tickets to a hit movie, for that restaurant table on Friday night.

Jamol Pender, who researches queuing theory as a professor of operations research and information engineering at Cornell University, said companies should be thinking about how they’re going to deal with lines now. “It’s hard to say like all these small businesses, they should have visionaries, etc. But you do need to sort of look ahead and see what is the landscape, how are things kind of moving?”

Because a lot of money could be left on the table if businesses aren’t prepared.

Businesses have ways to make people feel like they’re not waiting as long, for instance, playing music and offering customers a seat at the bar until their table is ready.

One of the best ways to cut down on waiting is to just offer more of whatever you sell. That’s what Steve Wong is planning at Oxalis, the restaurant he co-owns in Brooklyn.

“Candidly speaking, the most difficult times are likely behind us,” he said.

When I met Wong in August, his team was trying to turn an overgrown parking lot behind the restaurant into a space worthy of its Michelin star. Back then he planned to ditch outdoor dining once life returned to something like normal. But now, he said, “we feel pretty good that there’s going to be somewhat of a kinda boom coming our way and getting to reap some of the benefits of having all the pent-up demand.”

Come summer, he expects the restaurant to book a month out, just like old times. So he’s upgraded the new outdoor space, is planning to expand hours and is looking for a spot to open a sister restaurant.

Because you know what they say, even if we haven’t heard it in a while: Time is money.