What’s on the agenda at Friday’s EU summit

What’s on the agenda at Friday’s EU summit

Kai Ryssdal: And if this is a Wednesday, it must be time for an update on the European debt crisis, right?

There was some news around the edges of the negotiations over how to finally figure out an answer to this thing. But the real story took a break today, to be picked up tomorrow and Friday with that big meeting, and the new European Union treaty that Germany and France are pushing.

So while we wait, we asked our senior business correspondent Bob Moon to do a little prep work. A scorecard, if you will, of the sticking points and possible solutions.

Bob Moon: This time, French officials are vowing to keep bargaining until they reach what they call a “powerful deal” they can show the world.

This has a familiar ring. Marc Chandler is global head of currency strategy at Brown Brothers Harriman.

Marc Chandler: This summit is, I believe, the fifth one since the middle of 2010 that the Europeans have billed as a comprehensive do-or-die moment, so to speak.

Chandler thinks an agreement can be reached, but he concedes finding unanimous accord among all 27 members of the European Union is unlikely. German officials say they’ll be satisfied if they get the support of just the 17 countries that use the euro.

Even just a concerted message from the major players could be enough to persuade skittish lenders, according to Douglas Elliott at the Brookings Institution.

Douglas Elliott: If you get Chancellor Merkel and President Sarkozy and President Draghi of the European Central Bank to step forward and make clear they’re putting their political weight behind it, I think the markets will see that this is serious.

The question is: Will the weaker nations agree to the dictates of the stronger ones? There’s still a lot of hand-wringing over proposed rules that would limit the deficits of euro nations to 3 percent of their gross domestic product.

Elliott says the deeply indebted countries have no choice.

Elliott: What is the phrase? Something like, “He who pays the piper makes the rules”?

And Marc Chandler says Germany is doing what any prudent investor would do when asked for a bailout by a poor relation.

Chandler: It’s sort of like if my sister asked me for money. I, of course, would give her the money, but I’d want to, like, help her if she’s like a chronic debtor, and work out a repayment schedule. I’d want to make sure she’s not just going to take that money and go to Las Vegas with it.

Chandler says he’s hopeful Europe’s debtor nations will accept the terms — because the alternative, he says, seems so dreadful. 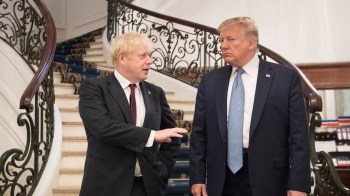