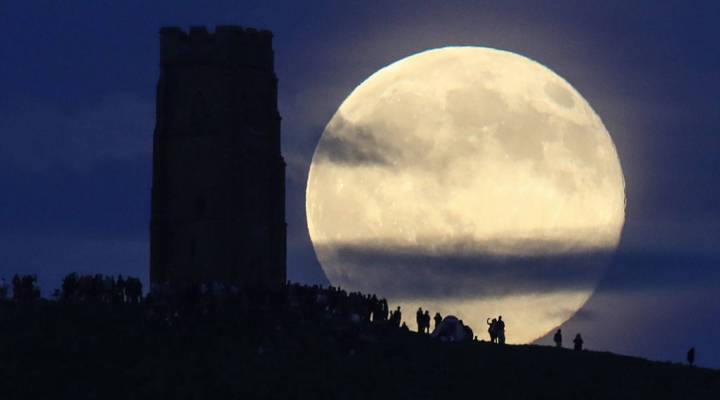 It’s been nearly half a century since a human has stepped foot on the moon.

As private companies race to get rockets into space, governments are coming together to fund missions aimed at sending people back to the lunar surface.

This week in Seville, Spain, European research ministers are discussing how to allocate as much as $14 billion over three years to the European Space Agency. The money will cover a huge swathe of projects including support for American efforts to send astronauts back to the moon, and initiatives to build new Earth observation satellites to monitor climate change.

On the global edition of “Marketplace Morning Report,” the BBC’s Victoria Craig spoke with Jonathan Amos, a BBC correspondent attending the conference in Seville. Below is a condensed version of their conversation.

Jonathan Amos: The United States is intent on going back to the moon. It’s got a series of missions called Artemis. The first one to put astronauts on the moon is called Artemis 3, and the target date is for 2024. The astronauts will travel in a crew capsule called Orion, which has a propulsion unit provided by European industry. Part of the meeting in Seville is to secure funds to purchase more of those propulsion units to go on future Orion capsules. So Europe really wants to be part of the return to the moon. Of course, the big incentive for Europe is that maybe in the next decade, a European astronaut will be sitting in that capsule, which would be the first European on the surface of the moon.

Victoria Craig: So, for now, it’s helping the U.S. space program get more astronauts to the moon?

Amos: Yes, and there will be other contributions as well. Ministers are proposing to have a space station around the moon, which is called Gateway. It’s kind of like a mini International Space Station. And it’ll be a pit stop, if you like, for the astronauts as they go to the moon. Europe also wants to build parts of that as well. Another part of this meeting is to secure the funds that will enable European industry to build a modular habitation module where astronauts could live. It would be the entrance to the station where spacecraft would dock, and it would also have big windows so the astronauts could look back to Earth and look down on the surface of the moon and also direct robotic operations on the outside of this space station. So, there’s a lot to discuss here and ministers are going to have to get their checkbooks out if they want to see any of this take place.

Craig: It isn’t just lunar projects these ministers are talking about. What are some of the other ideas they’re considering? Is climate research among them?

Amos: Yes, this is a key meeting for Copernicus, the biggest Earth observation program in the world. It’s a series of satellites procured by the European Space Agency, owned by the European Union. They have been taking a health check on planet Earth for the last few years. They have six going up at the moment, and they want another six with different sensors to look at different aspects of the health of the Earth. Ministers here have to get checkbooks out again to fund those future missions. It’s kind of like a scratch my back and I’ll scratch yours in the sense that they bid against different programs hoping to get research and development contracts back. So this is a very important meeting for driving the global competitiveness of European industry on Earth observation, studying the climate, studying Earth, making the spacecraft that do that is an essential part of it.

Craig: Britain is one of those countries pulling out its checkbook. Interestingly, it’s looking to increase its spending in these projects by 15%.

Amos: Yes, they’ve indicated for a few months now that they want to increase their subscription. It’s about $390 million, currently per year. It’s likely to increase here by more than 15%, that subscription. That’ll allow Britain to take the lead on a number of new ventures. What will be interesting to see is how hard they go into Copernicus — the Earth observation program — because as I say, it is owned by the European Union. And, of course, the U.K. is set to leave the European Union. It would then have to reassociate to join as a third country if it really wanted to continue participating at a top level, but that is something that would come only after Brexit.