The major role of politics in causing famine

The major role of politics in causing famine

Kai Ryssdal: The United Nations said today it expects the already serious famine in East Africa will get worse over the next few months. The U.N. says almost 12.5 million people are in need of food assistance in Somalia, Ethiopia, Kenya and Djibouti. Tens of thousands have already died; refugee camps are overflowing.

Large-scale famines like that aren’t new in East Africa, or elsewhere. Thomas Keneally has a new book out about famine. Three historic ones, specifically: The Irish potato famine in the 1840s; the Bengal famine during World War II; and the one most of us probably remember, 1980s in Ethiopia. Mr. Keneally, good to have you with us.

Ryssdal: For all the association with food that we have when we think of famine, this book really explains that it’s not about food, is it?

Keneally: Well, it’s about food to the extent that if a drought occurs and a farmer and his family have one or two staples, and you knock one of those staples out, they’re in immediate trouble. But it’s also ideology which causes the scale of the tragedy.

Ryssdal: How so? Explain that a little bit.

Keneally: For example, if you believe that the famine is being overexaggerated — as Churchill did with the Bengal famine in the 1940s; and if you fixed upon buying armaments as the Ethiopian dictator Mengistu was, to wage war in the north of his country against the Eritreans — these account for more than the original catastrophe itself.

Ryssdal: Why is it, though, that if so much of famine is made worse by people, why is it so hard for people to make famine better? Meaningful relief and aid is so, so difficult?

Keneally: The nature of the distribution is going to be finally up to the government in place. But if you have the sort of disorder you have in Somalia; if you don’t have a fleet of trucks for the distribution of the food; if you don’t have good roads; if there is an inadequacy of shelters, government shelters and clinics — these factors contribute hugely to famine also. Now, we’re in a bit of a dilemma. We can be tough on the government, but then the people don’t get fed.

Ryssdal: Yeah well so dilemma’s exactly it, right? I mean, should aid agencies look the other way so that the people get the food? Or should they should look harder and pressure the governments?

Keneally: One does look for example at Ethiopia, and again, you’ve got not an act of god, but an act of specific men standing between the people and their food. If it had been told to the U.S. or Europe or Australia or anywhere else that at the height of the famine, Mengistu was buying Russian arms to pursue a totally unnecessary civil war, people wouldn’t have been generous and it would made it harder to raise the money. And to be honest, aid agencies are human too. They knew that Ethiopia was the biggest game in town. It’s a profane way of looking at it, but there is an aid industry and agencies compete for our dollars. And so, to an extent, they couldn’t afford to act out.

Ryssdal: Thomas Keneally, his latest book is called “Three Famines: Starvation and Politics.” Mr. Keneally, thank you so much for your time.

Keneally: Not at all, thank you for the interview. 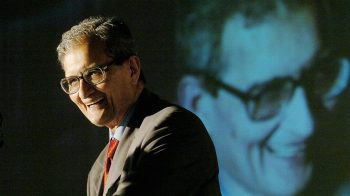