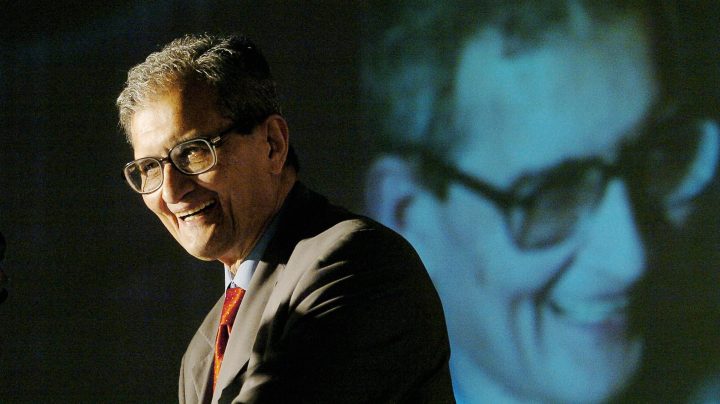 COPY
Amartya Sen in 2004. The pain of war and famine made an impression on him during his youth. Prakash Singh/Getty Images
Shelf Life

Amartya Sen in 2004. The pain of war and famine made an impression on him during his youth. Prakash Singh/Getty Images
Listen Now

Economist and philosopher Amartya Sen was born into an academic family in the Bengal region of India in 1933. That was during British rule, which lasted until 1947. In his new memoir, “Home in the World,” the Nobel laureate reflects on how his memories from the early years of his life — in Dhaka, Bangladesh; Kolkata, formerly Calcutta, India; the United Kingdom and the United States — shaped his economic thinking. Sen went on to win the Nobel Memorial Prize in Economic Sciences in 1998 for his work in welfare economics, including research on famines, poverty and social choice theory.

Click the audio player above to hear Sen’s conversation with “Marketplace” host Kai Ryssdal. The following is an excerpt from the book.

By the early months of 1942 I felt well settled in Santiniketan. The tranquil nature of ‘the abode of peace’ was quite striking. And being able to go everywhere on foot or on a bicycle was very enjoyable. The near total absence of motor vehicles was a boon that I came to appreciate more and more as I got used to the way of life there. I particularly relished the relaxed academic atmosphere at Santiniketan School and the opportunity to learn about all kinds of extraordinarily interesting things, often much outside our curriculum. I continued to roam around in our ​­open-​­access and ​­user-​­friendly library, tasting this and getting into that, with an abandon that transformed my life.

Yet, even as my own life was going so well, I was becoming increasingly aware that there were great tensions in the world around ​­me — ​inside India and outside it. A ferocious world war was going on, the eastern front of which was moving closer and closer to us. But India’s problems were not only of external origin. There were politic­ally cultivated tensions between Hindus and Muslims. And on top of that there were rapidly rising food prices; the intense hardship they caused was a subject of constant conversation in ​­many — ​I imagine most — ​homes in Bengal. All these problems and concerns worried my grandparents with whom I was living, and also our relations, including of course my own parents, who would visit us frequently in Santiniketan. When I went to Dhaka in the school vacations to be with them, I found the state of anxiety there to be even more palpable.

I saw the first signs of famine in April ​­1943 — ​the ​­so-​­called ‘Great Bengal famine’ which would kill between 2 and 3 million people. Food prices had started rising quite sharply during 1942, the year before the famine.

At the end of a class in the spring of 1943, we were told by some younger students that a man with evident mental derangement, who had just appeared on the Santiniketan campus, was being cruelly teased by a couple of school bullies. We went to the scene of this barbaric ​­activity — ​near the cricket ​­ground — ​and, while the two bullies were individually stronger than each of us on our own, there were a great many of us who together could give them pause. After the tormenters left with some angry words, we tried to talk to the victim. He was barely coherent, but we gathered that he had not eaten anything for nearly a month. One of our teachers joined us as we were conversing, and we gathered from him that prolonged starvation often does produce mental derangement.

That was my first direct contact with a famine victim. But soon there were others who came into our neighbourhood in the hope of escaping starvation. Their numbers grew as the classes stopped in May for the summer vacation. My parents joined me in Santiniketan (it was my father’s holiday too, at Dhaka University) as famished victims kept arriving in larger and larger numbers. By the time the school reassembled in July, the trickle had grown into a torrent of miserable humanity. They were looking for anything whatever that they could eat. Most of them were on their way to Calcutta, nearly a hundred miles away, having heard rumours of arrangements there for the feeding of destitutes. These rumours were vastly exaggerated. The government was not, in fact, providing any relief and private charities were woefully inadequate. But because of the rumour it was to Calcutta that the starving wanted to go. From us, they wanted a little help with ​­food — ​maybe even leftover or rotten ​­food — ​to allow them to survive as they continued their journey, on the way to Calcutta.

The situation continued to worsen, and by September we thought that perhaps 100,000 destitute people had passed through Santiniketan on their long journey to the big city. The continuous cries for ​­help — ​from children and women and ​­men — ​ring in my ears even today, ​­seventy-​­seven years later. My grandmother allowed me to give a cigarette tin full of rice to anyone who begged for food, but she explained, ‘even if it breaks your heart, you cannot give any more than one ​­tin-​­can of rice to anyone, since we have to help as many people as we can.’ I knew that small cans of rice would not go very far, but I was glad that we could at least do something to help. One of those who arrived at that time, as I related earlier (in Chapter 4), was Joggeshwar, an almost fatally hungry boy of fourteen from Dumka, about forty miles from Santiniketan, whom my aunt fed immediately to save his life.

Excerpted from “Home in the World: A Memoir.” Copyright (c) 2021 by Amartya Sen. Used with permission of the publisher, Liveright Publishing Corp., a division of  W. W. Norton & Co., Inc. All rights reserved.