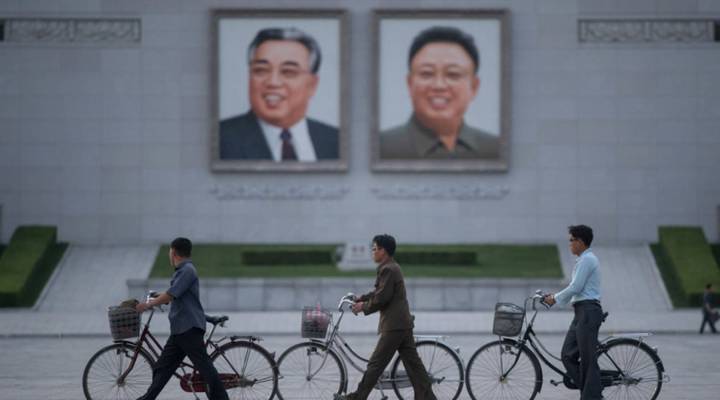 Last year, the Trump administration banned U.S. citizens from traveling to North Korea. Before that, the country was only getting around 1,000 visitors from the U.S. annually. That means few Americans have traveled there or seen how the country has changed under Kim Jong Un’s leadership. Travis Jeppesen is one of those few people.

Jeppesen took his first trip to North Korea in 2012, just a few months after Kim Jong Il’s death, and has visited four times since then. In 2016, he completed a one-month Korean language program at Kim Hyong Jik University in Pyongyang, making him the first American to study at a North Korean university. He wrote a book about his experiences called, “See You Again in Pyongyang: A Journey into Kim Jong Un’s North Korea.” Marketplace host Kai Ryssdal talked with Jeppesen about some of the changes he’s seen in North Korea since first traveling there. The following is an edited transcript of their conversation.

Kai Ryssdal:  There is this great anecdote at the beginning of this book. It’s you showing up in the country for this month of language study, taking forever to clear customs on the way in because of all the North Koreans who have been lucky enough to travel overseas coming back with bags and bags of electronics and other stuff that they can trade on the black markets there.

Travis Jeppesen: Right. That’s very much the case. I mean, anytime a North Korean gets the opportunity to go abroad, they’re going to come back with their suitcases stuffed full pretty much. I mean, it’s understandable, they’re under heavy, heavy, sanctions, and they don’t have access to these goods and materials. They are not necessarily all of them bringing these items back to sell on the black market. They use them for different things. They can use them, for example, for bribes.

Travis Jeppesen in Pyongyang, North Korea. He says capitalism came to North Korea as a result of the mid-1990s famine.

Ryssdal: There are a couple of themes in this book that I want to hit on that that I think will resonate with American listeners. The first one is for a country that is so poor, you talk a whole lot about how important money is there.

Jeppesen: Yes, capitalism really came to North Korea as a result of the famine years of the mid-1990s, when the public food distribution system which all North Koreans more or less relied upon, you know, in the state-run socialist economy, that system broke down and people effectively had to go into business for themselves in order to survive. So this is when the black markets sprang up all around the country. And so, little by little, capitalism has been creeping in over the years.

Ryssdal: Tell me about your minder. Min is the name you give her, I’m assuming that’s a pseudonym, but she is entrepreneurial, I guess one would say?

Jeppesen: Yeah, she’s emblematic sort of this new class of millennials in North Korea. They call them the “Jangmadang generation.” “Jangmadang” is the name of unofficial markets that sprang up in the 1990s and now have really become more — it’s really become more of a gray market economy than a black market economy, because gradually the government has had to come to accept the existence of these markets. Everybody, frankly, shops at them.

Ryssdal: But she, Min, your minder, she actually asked you to help her set up businesses and introduce her to people on the outside. She wanted to start a French restaurant, right, with one of the guys in your group?

Jeppesen: Right, right, this was one of her ideas. There was a French student studying with us, and so the idea is that they need foreign partners for the sort of startup capital. Of course, none of the students that I was studying with, none of us seriously took up any of these offers. In most cases, it would be a violation of sanctions and would result in us getting into a lot of trouble, but we were certainly sort of sympathetic to this desire that they had.

Ryssdal: Does the — I won’t say capitalism right, because it’s not, but it’s a North Korean kind of capitalism, I suppose, with a very heavy black market influence — does it operate in the open or is it kind of a nudge, nudge, wink, wink? how does it work?

Jeppesen: Increasingly it’s operating more and more out in the open. You know, one of the fascinating things about visiting North Korea many times over the last five years is to see the extent to which you know there are more and more obvious displays of wealth on the streets of Pyongyang. You know, Hermes handbags, Gucci sunglasses. This area in the city center that expats have taken to calling “Pyonghattan” or Dubai they sometimes call it. There’s really been sort of a widening of this class of new money elites.

Ryssdal: To your title, as I let you go, “See you again in Pyongyang.” You’re going back?

Jeppesen: I hope so. There’s a travel ban at the moment. I would like to go back one day.