Kai Ryssdal: About that grilled chicken you ate for lunch today. You know, most of us are a long way removed from the business end of the food chain in this country. And I mean the business, business end, not the how-a-chicken-turns-into-KFC end.

New Department of Agriculture rules went into effect New Year’s Day. They’re supposed to make sure chicken farmers get a fair shake from the giant poultry companies they have to do business with. Some of those chicken growers say the USDA help came a little bit too late. Kate Archer Kent of Red River Radio reports.

Kate Archer Kent: The market for chicken is built on trust. The poultry company delivers its fuzzy yellow chicks to the farmer when they’re a day old. The farmer acts as a contractor to the poultry industry. He gives the fledgling brood just the right amount of food, water and warmth. Then, seven weeks later, the poultry company returns and trucks the chickens off to the processing plant. That cycle happens over and over. But sometimes the farmer gets an unsettling call. The current flock will be his last.

RHETT HANRY: It just knocked the wind out of you. You just can’t hardly get back up on your feet.

HANRY: My chickens were two days old at the time. We were anticipating something, but nothing quite that drastic.

Hanry’s high-tech barns were computerized to provide the perfect growing conditions. Neighboring farmers made similar investments, counting on a ready supply of flocks. Inside Kevin Hux’s poultry barn, stray feathers and manure are all that remain. Hux installed rows and rows of new drinking nipples for what turned out to be his last flock. The $5,000 upgrade never paid off.

The USDA’s new regulations may have helped farmers like Kevin Hux. Among the new rules: Farmers must have a contract before they build chicken houses. Companies can no longer add confidentiality clauses to those contracts. Those stipulations barred farmers from disclosing terms of the deal with lawyers or even family members. And the poultry company must give at least 90 days notice before cutting ties with the farmer. Poultry giants like Tyson’s and Pilgrim’s Pride defer to the National Chicken Council for comment.

RICHARD LOBB: The things envisioned in the rule are primarily being done already by the companies and their contracts with the growers, so we don’t expect this will be any big, radical change.

Lobb says the poultry companies support the USDA’s action, with one caveat. He says giving a farmer 90 days notice before terminating a contract is excessive.

LOBB: The flock only lives for 42 to 49 days. That puts companies in a kind of tough position to notify the farmer that he is going to be canceled.

JOHN HARSON: Why don’t we walk out in them.

These are the collective peeps of 20,000 baby chicks on John Harson’s farm in Haynesville, La. He raises chickens for Foster Farms. Harson has been a grower for 30 years. He says his dealings with the poultry companies have always been amicable, as long as he understood the arrangement.

HARSON: The poultry company and my relationship is like a partnership, except that they own 51 percent of the stock. Whatever they say goes.

Farmers here are still hoping the local processing plant reopens. The normally stable chicken market was hurt during the recession. The National Chicken Council is forecasting a rebound as the economy recovers and people eat out more and order up the chicken cort en bleu.

From the Louisiana-Arkansas border, I’m Kate Archer Kent, for Marketplace. 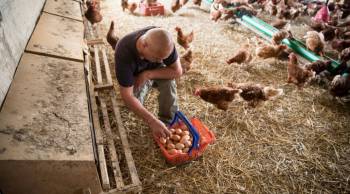