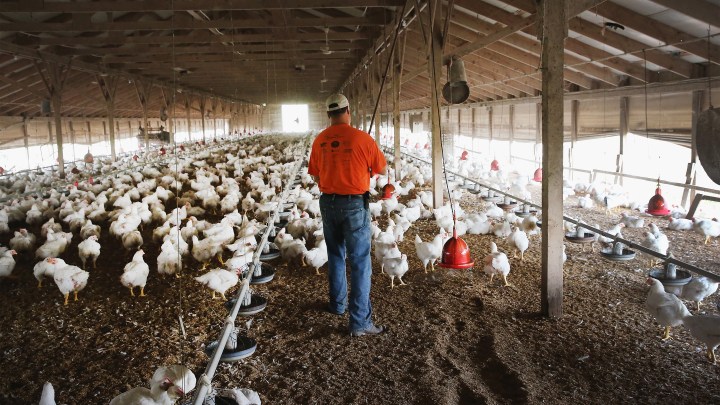 U.S. Trade Representative Robert Lighthizer is heading to London in a few days for trade talks with British officials. Now that it’s left the EU, Britain really wants a free trade agreement with the U.S.

But there are a lot of landmines. One of them is something called “chlorinated chicken.” In the U.S., some chicken producers use chlorine to wash chicken meat and kill bacteria that cause food poisoning. In the United Kingdom and Europe, chicken producers don’t. And they want to keep it that way.

“In America, the standards for farm animals, including poultry, are much lower than they are in the UK,” said David Bowles, head of public affairs at the RSPCA, an animal welfare organization in the U.K. “Particularly, in how they clean the sheds, which is why the chicken have to be washed in chlorine or other disinfectant.”

Tom Super, senior vice president of communications at the U.S. National Chicken Council, agrees that this isn’t about chlorine. Only 10% of processing plants in the U.S. use chlorine to disinfect chicken meat. But, he said, it’s not about standards, either.

“The issue has always been about politics and protectionism,” Super said. “Our safety standards and our welfare standards are among the best in the world — we’re the most efficient producer of chicken.”

U.S. chicken is produced in a more industrial way than British and European chicken, and it’s a lot cheaper. If U.S. producers got access to the U.K. market as part of a free trade deal, British producers would suffer. But according to the Gary Hufbauer, a senior fellow at the Peterson Institute for International Economics, the U.K. has another problem: the European Union.

“The EU does not want to see inroads into their chicken defenses by the U.K.,” Hufbauer said.

All of which is leaving Britain in a very difficult position.