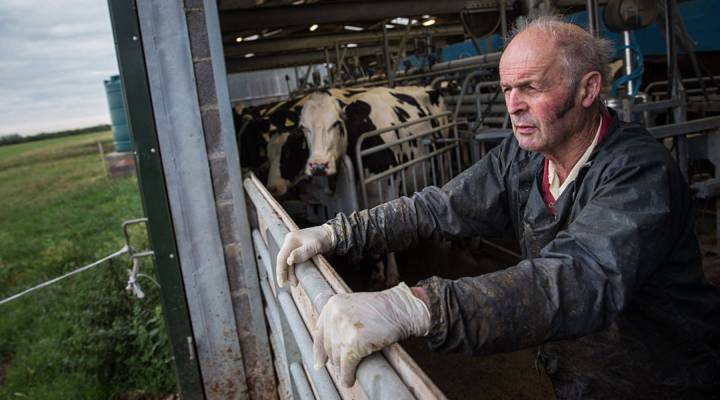 COPY
A dairy farmer looks out of the milking parlor at Newlands Farm in Bozeat, England. Rob Stothard/Getty Images
Brexit

A dairy farmer looks out of the milking parlor at Newlands Farm in Bozeat, England. Rob Stothard/Getty Images
Listen Now

Most British farmers voted for Brexit in last year’s referendum on European Union membership. That’s according to some informal, unscientific online surveys. If true, this looks a little odd. British farmers seem likely to suffer disproportionately from the United Kingdom’s decision to pull out of the EU, losing subsidies, and, if the U.K. government succeeds in negotiating a post-Brexit free-trade deal with the United States, farmers could face tough new competition in their home market from cheap American produce.

Marketplace visited the annual Gillingham and Shaftesbury Agricultural Show in rural western England to check out the mood among a random selection of farmers exhibiting their stock.

“I’m nervous about Brexit,” said Pat Apsley, who rears sheep and cattle on his small family farm of 100 acres. “It’s the unknown. It’s like a divorce. You don’t know what’s going to happen, really.” What Apsley fears most is the loss of EU subsidies. “I’d be finished without them. Couldn’t farm without subsidies,” he insisted. Already, he has to drive a cab in the evenings and weekends in order to keep his farm going.

EU agricultural  subsidies for the U.K. amount to $3.8 billion a year and make up more than half of the total of all farm income in Britain; some farmers depend on subsidies for more than 80 percent of their earnings. Of course, all that money came originally from the British taxpayer, and it could, in theory, continue to flow indefinitely into the farmers’ pockets after Brexit. But while the British government has promised to continue paying this state aid for at least three years after departing the EU, there is doubt about the long-term future of this funding.

So why would a farmer opt to leave the European Union? Apsley said he voted to remain, and Marketplace did not encounter any farmers at the show who admitted voting for Brexit. But the National Farmers Union, which urged its members to vote “remain” in the referendum, speculates that many may have done the opposite because of  frustration with EU bureaucracy and regulation.

Another worrying consequence of  last year’s referendum result is a proposed free-trade deal with the United States. This could bring into Britain a flood of cheaper meat produced using American practices that are currently banned in the U.K. on animal welfare grounds. Hormone-treated beef is one example,

“They cheat, don’t they? They feed their cattle with this stuff to get bigger and quicker meat,” said small–time cattle farmer Neil Hutchens, who was exhibiting his Blonde d’Aquitaine cows at the show. “I’d be worried that we’d have to do the same in order to compete on price. It’s all about economics, isn’t it?  If you make more money this way, that’s what’s going to happen.”

The American practice of washing slaughtered poultry to kill bacteria arouses similar concerns. The practice is currently banned in Britain on the grounds that it allegedly allows the birds to be kept in unhygienic conditions before slaughter.

But judging by some of the consumers at the farm show, British poultry and cattle farmers have nothing to fear from this possible American competition.

“You bathe in swimming pools that have chlorine in them, and I don’t like doing that, so I certainly don’t want my chicken washed in chlorine,” insisted May McGrowther. And Stephen Colley said he “probably wouldn’t” eat hormone-fed beef.

But American produce, which British food regulators accept is perfectly safe, could be as much as 20 percent cheaper than the British variety. And that may tempt the pocketbook, if not the palate, of many cash-strapped Brits.

All in all, whether they voted for Brexit or not, British farmers face an uncertain future. But Sam Braddick, organizer of the Gillingham and Shaftesbury show, remains relentlessly upbeat.

“I’m absolutely convinced that British farmers will, in the end, come out on top!” he said.