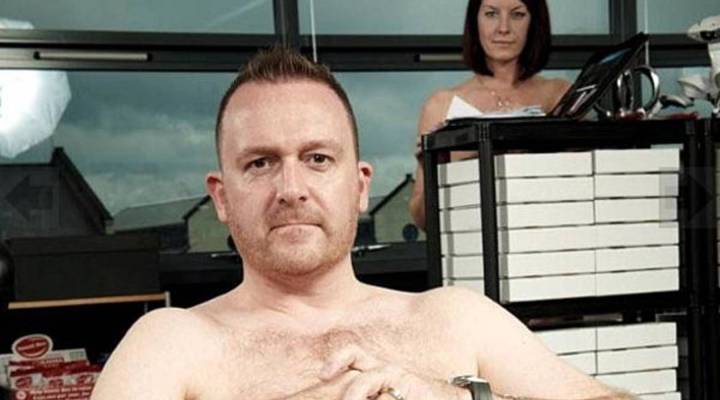 Tess Vigeland: We hear a lot about the effects of layoffs on those employees who get pink slipped. Not so much about the folks who are left behind in the office. Of course, they’re the lucky ones. But they’re also dealing with low morale and heavy workloads. What’s a boss to do? You could hold a meeting. Maybe send out emails thanking everyone for pitching in.

Or you could suggest that on one Friday everyone come to work naked. The employees of Onebestway, a design and marketing firm in the north of England, have done just that.

And their managing director Mike Owen joins us now from the office in Newcastle.

Mike, welcome to the show.

Mike Owen: Thank you very much.

Vigeland: So have you partaken in this Friday event?

Owen: Yeah, it was three or four weeks ago now. And we worked with a business psychologist guy called David Taylor. He’s the author of three books called “The Naked Leader.” And he reckoned that he could bond us so closely as a team that by the Friday we’d be comfortable enough with each other to work naked.

So there you go. Don’t giggle.

Vigeland: I’m sorry, I’m really going to try not to giggle too much. So were you yourself clothing-less?

Owen: You’ve just gone straight to the killer question, straightaway, haven’t you? That is the most important question of all.

But yeah, I absolutely drove to work naked. Yeah.

Vigeland: So if you drove to work naked, then that means you left your house naked and you walked from the car to the office naked as well?

Owen: That’s correct. And it gets scary, doesn’t it? But that’s the fact. It was early in the morning, so I didn’t frighten anyone. Maybe caught the squirrels, but that’s it.

Vigeland: Well, you want to describe the experience for us?

Vigeland: But really, what is the point of a goal of going naked for a Friday?

Owen: That’s a really good question. Because it needn’t have been naked really. I mean, the media, of course, latched onto the nakedness…

Owen: You know, that’s one of the reasons why we actually chose that as the goal. But the point is, if you’re going to do something — you only live once — so do something interesting.

Vigeland: What do you think this has done for your staff ultimately? You know, for all of us who work in a workplace, in an office, describe the benefits.

Owen: No problem. It’s actually quite easy to do. Can I ask you a question: How long have you worked where you work?

Owen: OK. In your eight years, you’ll be very close to some people, but not as close as we are to each other here. It really just speeds up the way we communicate with each other. It takes it to another level. There may be things that sometimes when you’re talking to your colleagues or if they’re talking to you, stuff gets in the way, you know? And we’re much better now at clear thinking and clear communication.

Vigeland: I suppose it’s maybe my American prudishness. I would find it awfully distracting, if all of my co-workers walked around naked.

Vigeland: So this business psychologist comes in and you decide maybe it’s a good idea. Did people at first maybe think you were a bit nuts?

Owen: Yes. To answer your question directly, it’s a crazy idea. But I’m really one of those people who, without hurting anybody’s feelings, you live once, so go for it.

Vigeland: Alright, well, my next step is to go around and ask my colleagues if they would like to partake in this kind of experiment. And we’ll let you know how it goes.

Vigeland: Mike, thanks so much.

Vigeland: Bob Moon, senior business correspondent, you’ve been at Marketplace for a while. I assume you are in favor of staff getting to know one another.

Vigeland: What would you think of all of us, perhaps, coming in without clothes on Friday.

Moon: You want the bare facts, do you?

Phyllis Owens: I think it takes TMI to a whole new level: Too much information. Maybe it’s just me.

John Haas: I think the psychological damage would be irretrievable.

Betsy Streisand: I think I’d stay home. And I can’t think what would be scarier: Me having to be naked or me having to look at my co-workers naked.