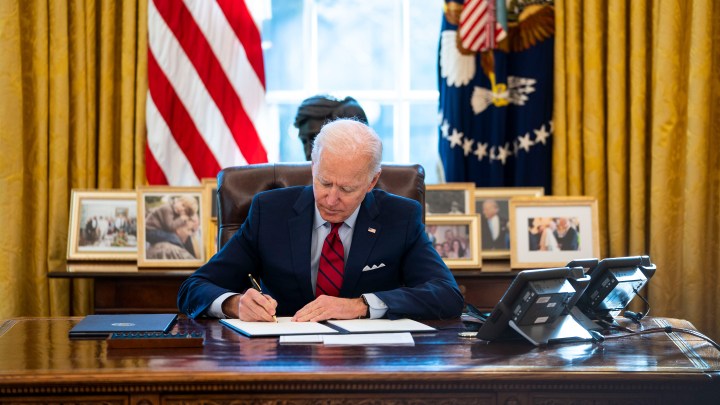 President Joe Biden is set to give a speech on the economy Friday. We already know a good amount about what he wants to do, from the campaign and from his proposed $1.9 trillion COVID-19 relief package.

But to get that through, of course, he’ll have to work with a very divided Congress. So, how much control does Biden, or any president, actually have over the economy?

Presidents tend to get a lot of credit when the economy is doing well and a lot of blame when it’s not. Both are probably misplaced, said Ann Owen, an economics professor at Hamilton College.

“Sometimes all the groundwork for success was laid by the previous administration. But the next administration takes the credit, right? Or vice versa,” she said.

A lot also depends on Congress, Owen said, and on monetary policy, which presidents don’t control.

“If we’re thinking about them acting unilaterally, they have very few tools,” said Bill Antholis, at the University of Virginia Miller Center. He said that’s especially true when the economy is in crisis.

“Their ability to perfectly correct the crisis is extremely limited,” Antholis said.

With this particular crisis, Owen said the president may have more influence than usual.

“The underlying problem that we’re facing right now is actually a public health crisis,” she said.

So anything Biden does to address COVID, Owen said, could have a significant impact on the economy.