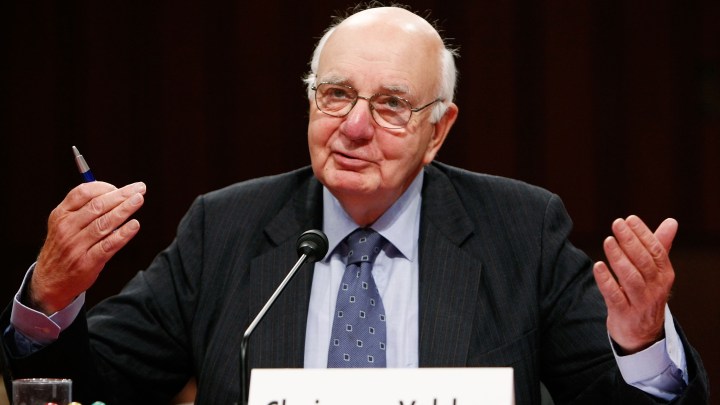 In the early 1980s, Ann Owen managed a bank branch in Boston. She remembers telling customers they’d have to pay 21% interest for a car loan.

Today, the average rate of interest is just over 4%.

“They would get mad at the bank, and many times they would just basically say, ‘I can’t afford that,'” Owen said.

Owen went on to become an economist at the Federal Reserve, and now teaches at Hamilton College. She said those high interest rates had a purpose.

Then-Fed Chairman Paul Volcker was trying to tamp down inflation, which was in double digits. The goal was to slow down price increases by making borrowing more expensive.

“It made it difficult for people to buy houses, buy cars — credit card interest rates were extremely high,” Owen said.

The economy did slow down, falling into two recessions. In 1982, unemployment topped 10%. In protest, home builders mailed chunks of two-by-fours to Volcker and members of Congress. Fred Napolitano, former president of the National Association of Home Builders, remembers sending them.

“Just to make a point to say, ‘Look, this is what we do. This is what we build and with this interest rate, it’s hurting us,'” Napolitano said.

That pain eventually paid off, said Robert King, a professor of economics at Boston University.

“Ultimately, once people began to believe that inflation was going to come down, it came down, and interest rates tumbled,” King said. “The economy recovered, and it’s viewed as a major triumph.”

A triumph nobody wants to have to repeat.