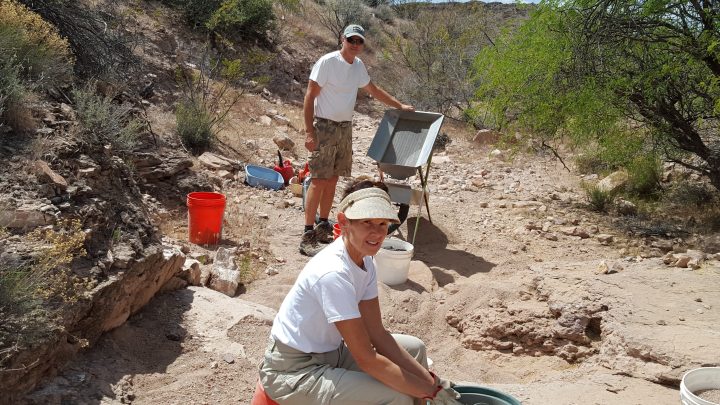 COPY
Terry Teich and Mark Walters pan for gold in a dry creek bed in Arizona. The "snowbirds" returned to their home in Duluth, Minnesota, in early May. Courtesy of Mark Walter and Terry Teich
COVID-19

Terry Teich and Mark Walters pan for gold in a dry creek bed in Arizona. The "snowbirds" returned to their home in Duluth, Minnesota, in early May. Courtesy of Mark Walter and Terry Teich
Listen Now

For the past three years Robyn Argir and her husband, Jeff, have spent winters in the tiny mining town of Madrid, New Mexico. Jeff has multiple sclerosis, and they wanted a warmer, drier place to live for a few months of the year.

When the weather warms, they migrate north to their home on Owen Lake in Minnesota, about four hours north of the Twin Cities.

They usually return in April. But as COVID-19 began to spread around the U.S., and states began to put stay-at-home orders in place, the Argirs started to worry they might not be able to make it back to Minnesota.

“So one morning we just got up and decided we got to go … just threw everything in the back of the truck. And off we went!” Robyn said.

It was the middle of March. There weren’t a lot of cars on the highway. And those that were, recalled Robyn, more often than not belonged to fellow Minnesotans.

The state of Minnesota estimates it has more than 44,000 snowbirds —people who move to a warmer southern state in the winter. Some, like the Argirs, have already come back to Minnesota. Others are delaying their returns. They’re weighing the risks of travel, and what they’re hearing from the communities they want to return to.

“They’re going to spread the virus. They’re going to overrun our stores,” are some of the concerns Kelly Chandler said she’s heard from residents of Minnesota’s Itasca County, where the Argirs live and where Chandler manages the public health division.

Carol Steele, who lives outside Grand Rapids, Minnesota, near the Argirs’ place, said she worries when she sees people who returned from out of town.

“And I wonder where did they come from? Did they come back already from someplace that isn’t taking care with regulations to keep people safe?”

Across northern Minnesota, rural communities are trying to strike a tricky balance between protecting local residents from COVID-19 while still welcoming the snowbirds, cabin owners and tourists who drive the summertime economy.

“We want everyone to be safe,” said Ben DeNucci, an Itasca County commissioner who also owns a small grocery store in Nashwauk, a half hour east of Grand Rapids.

“We want everyone to follow the guidelines. But at the same time, we know if we don’t have this traffic, it’s going to be really difficult.”

The solution DeNucci’s county came up with was to ask all returning snowbirds to self-quarantine for two weeks.

Some counties in the area took a harder line earlier in the spring. They asked snowbirds and tourists to stay away for a while.

“I got emails from people itemizing the amount of money they spend here and how they support the community,” she said.

But it’s not about money, Doo-Kirk said, it’s about keeping people safe. Still, she said the county softened the language of its advisory and now has a two-pronged approach.

“The first message is stay in place, stay where you are. The second message is if you’re just determined to be here, then when you get here, self-quarantine for a minimum of 14 days.”

Other counties across northern Minnesota are also asking snowbirds to self-quarantine for two weeks when they arrive at their homes.

Itasca County’s Chandler said her department has tried to be sensitive to public fears about snowbirds potentially carrying the virus. But she’s also concerned about stigmatizing them. She said some have reported feeling shunned or ostracized by their neighbors.

“Who are we to say you can’t come to your own property?” she said. “Someone could arguably make that case that they’re safer here than wherever they were previously. And then that their support systems might be here. It might be their children. It might be their grandchildren.”

Robyn Argir, who returned to her summer home in mid-March, said she and her husband stayed in their home for two weeks after making an initial trip to stock up on groceries. And she said they’re still not going out much.

“We have kind of hunkered down, and now we’re staying put until this thing gets better.”

And Argir makes a distinction between snowbirds and vacationers. This is her home, she said. She has family and friends here. It’s the best place, she said, to ride out a pandemic.