Economics and the Great Contraction

Economics and the Great Contraction

Barry Eichengreen, economist at the University of California, Berkeley, is always worth reading. He has written a number of brilliant articles on the Great Contraction. His latest piece is the called The Last Temptation of Risk.
In his latest one:

We now know that much of what we thought was true was not. The Great Moderation was an illusion. Monetary policies focusing on low inflation to the exclusion of other considerations (not least excesses in financial markets) can allow dangerous vulnerabilities to build up. Relying on institutional investors to self-regulate is the economic equivalent of letting children decide their own diets. As a result we are now in for an economic and financial downturn that will rival the Great Depression before it is over.

The question is how we could have been so misguided. One interpretation, understandably popular given our current plight, is that the basic economic theory informing the actions of central bankers and regulators was fatally flawed. The only course left is to throw it out and start over. But another view, considerably closer to the truth, is that the problem lay not so much with the poverty of the underlying theory as with selective reading of it–a selective reading shaped by the social milieu. That social milieu encouraged financial decision makers to cherry-pick the theories that supported excessive risk taking. It discouraged whistle-blowing, not just by risk-management officers in large financial institutions, but also by the economists whose scholarship provided intellectual justification for the financial institutions’ decisions. The consequence was that scholarship that warned of potential disaster was ignored. And the result was global economic calamity on a scale not seen for four generations.

You can read the whole essay here. 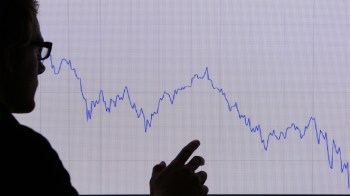 What is a contraction exactly?