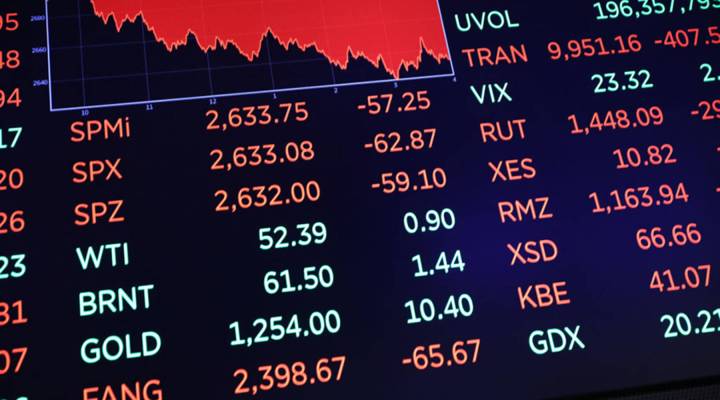 COPY
A board shows stock numbers on the floor of the New York Stock Exchange on Dec. 07. Spencer Platt/Getty Images

A board shows stock numbers on the floor of the New York Stock Exchange on Dec. 07. Spencer Platt/Getty Images
Listen Now

The risk of a recession in next year — or the year after — appears to be rising. Some investment strategists and economists see signs of economic trouble ahead in interest rates. Housing is faltering, the global economy is slowing and an unpredictable trade war is clouding the future.

Now you can add chief financial officers of U.S. companies to the list of pessimists. A quarterly survey by Duke University finds that just under half of them (48.6 percent) predict the American economy will be in a recession by the end of 2019. And more than 80 percent think a recession’s coming by 2020.

Compared to six months ago, the CFOs are less optimistic about their future business, they intend to spend less on plants and equipment, and they’re not as confident they’ll be able to hire the workers they need in a tight labor market.

“The U.S. domestic economy has been growing strongly,” he said. “And so there haven’t been signs until now coming directly out of the C-suite that we might be nearing the end of this long, robust growth period.”

If or when this long expansion (now 9 1/2 years old) does come to an end, it’s not likely to be anywhere near as bad as the Great Recession. In the depths of that sharp economic contraction, Marketplace reported that every day, the United States was losing 7,500 jobs.

“That was cataclysmic, a near-death for the financial system,” he said. “This is likely to be a much more typical kind of economic downturn.”

Zandi thinks there’s a good chance of recession in the next couple years, as labor shortages develop, wages rise and the Federal Reserve tries to slow down economic growth.

But a recession isn’t inevitable, said economist Betsey Stevenson at the University of Michigan.

“Economic booms do not die of old age. What normally causes some kind of downturn or recession is that there’s some kind of shock, something that goes wrong,” she said.