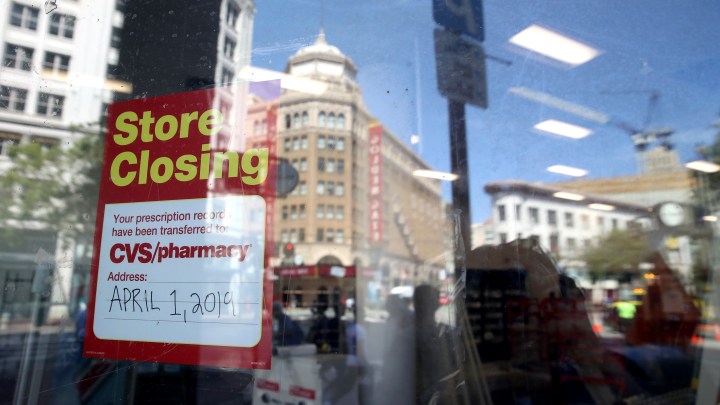 COPY
A sign is posted on the window of a closed CVS store on June 10, 2019 in San Francisco, California. Justin Sullivan/Getty Images

A sign is posted on the window of a closed CVS store on June 10, 2019 in San Francisco, California. Justin Sullivan/Getty Images
Listen Now

Duke University regularly surveys more than 500 U.S. and foreign chief financial officers (CFOs). Duke economist John Graham calls them: “the numbers people — we want to know what their hiring plans are, what their spending plans are.”

In the U.S., those plans were rosy back in the fall, when Graham said business-leaders’ economic growth expectations peaked. But since September 2018, he says, “there’s been a continued decline in CFO optimism and their general business plans.”

According to the most recent Duke survey, fielded through early June, nearly half (48%) of U.S. CFOs think the economy will be in recession by the second quarter of 2020; 69% predict a recession by the end of 2020.

CFOs outside the U.S. are even more downbeat about future economic growth: 85% in Africa, 63% in Europe, 57% in Asia and 52% in Latin America predicted their country will be in recession by spring 2020.

Graham pointed out that other countries are generally more dependent on foreign trade than the U.S. He said exports account for about 10% of U.S. GDP, but 40% of Mexico’s. That makes many foreign economies more vulnerable to global trade conflicts and tit-for-tat tariffs than the U.S. economy is.

Economist Rob Haworth at U.S. Bank Wealth Management says there is still a good deal of strength in the U.S. economy, with unemployment at a near-50-year low (3.6%), and the labor market tight.

But, Haworth said, “from a business leaders’ perspective, we’re clearly late in this economic cycle. The tax cuts are behind us. There’s not a lot of lift to help them in their businesses as they look forward.”