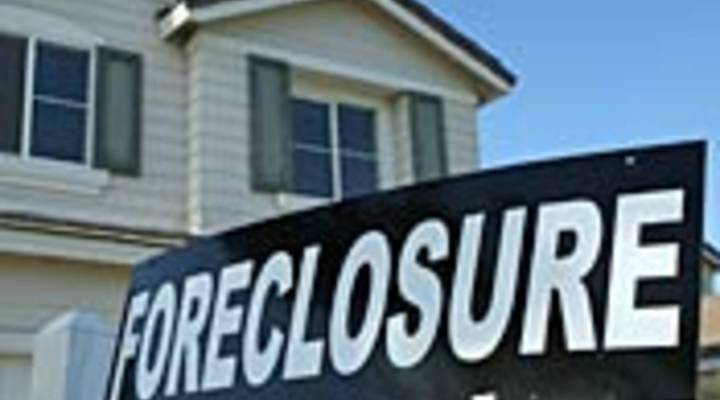 COPY
A foreclosure sign in front of a house for sale in Stockton, Calif. Justin Sullivan/Getty Images
Fallout: The Financial Crisis

A foreclosure sign in front of a house for sale in Stockton, Calif. Justin Sullivan/Getty Images
Listen Now

TESS VIGELAND: As Nic [Retsinas] just noted, the large number of home foreclosures, sadly, was one of the big stories of 2008.

This week we’re revisting a few folks we met last year, and today we turn to a family that experienced the foreclosure story firsthand.

Last February, reporter Mhari Saito spoke with John and Vicki Glicken of Lyndhurst, Ohio, a suburb of Cleveland. When we last heard from the Glickens, they were struggling to make their monthly mortgage payments. They had an adjustable rate mortgage that led them into bankruptcy proceedings.

Vicki Glicken: We were naive in a lot of areas.

Vicki GLICKEN: And we take responsibility for that. We went through a counseling session as part of your Chapter 13, and it requires you to come up with a budget. We’re trying to follow the steps, and this just keeps going up and up and up.

And John and Vicki Glicken are back with us now. Welcome to the program.

VIGELAND: John, let me start with you. What has happened since then?

JOHN GLICKEN: Well, since then we actually have moved. We’d been struggling, actually, prior to February of trying to get a loan modification. There was an offer on the table but it was exactly the same type of loan we would have signed and we did sign in the first place. And, basically, short of the story is the minute they received a $700 billion bailout, the offer was pulled off the table. Now, I don’t know if that was coincidental or not.

VIGELAND: So what did you end up doing? Did you walk away from your home?

JOHN GLICKEN: Yes. Yeah, we walked away — two weeks ago, as a matter of fact. We’re still in Lyndhurst, Ohio, and we are renting.

VIGELAND: Vicki, what’s it been like leaving your old home?

VICKI GLICKEN: It was very sad, and we were very angry for a period of time. But we actually feel a little bit relieved right now because at least we know we’re in a home. And we know that our son is . . . He’s a teenager, so it’s very important to them that they’re in the same school, you know, that they’ve been in and they’re with their friends. And that was important to be able to do that for him.

VIGELAND: Vicki, now that you are in foreclosure, where do you place the blame for your current situation?

VICKI GLICKEN: My husband and I, you know, took responsibility for our part in it because we were naive. We wish now that we would have known Richard, our attorney, back when we signed the papers. Because we would have had him, you know, review them. But, there are so many people — families that are in the same situation that we are — so I think that the banking industry need to take responsibility also. Because I think a lot of people knew exactly what they were doing, and I think they were very greedy. And I think those people are still being greedy, and I think that’s a shame.

VIGELAND: John, although it’s become more and more prevalent, foreclosure is, of course, a black mark on your credit history. Was it hard at all finding a new place to live because of that?

JOHN GLICKEN: It was extremely difficult. And, in all reality, the house that we’re staying in now, it took about two months for them to finally say yes. Our hope is one day that we could actually purchase this home later on down the road.

VIGELAND: Vicki, what are your plans now for 2009? Do you see it as a fresh start?

VICKI GLICKEN: We’re trying to look at it that way, because I think that’s more of a positive outlook. We hope to be able to go forward and possibly be able to do a rent-to-own option and stay in this home.

VIGELAND: Well, John and Vicki Glicken of Lyndhurst, Ohio, thanks so much for updating us. And I do hope it is a happy new year for you.

JOHN GLICKEN: Well, I appreciate that. Thank you.

VICKI GLICKEN: Thank you, very much.