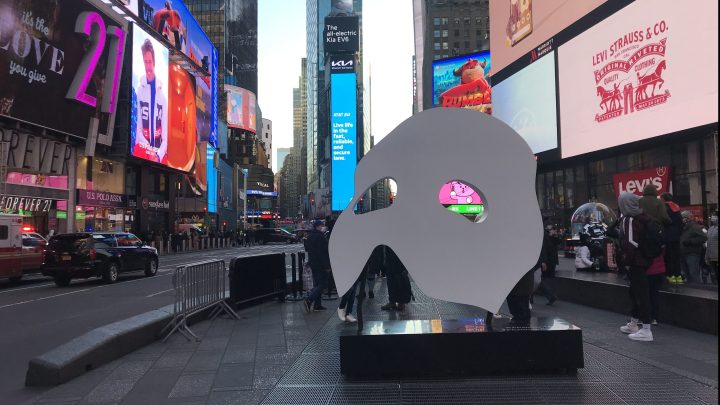 COPY
All of the people working on Broadway (and audience members) must be vaccinated. They’re also required to be masked when they're not performing. Above, an oversized mask from "The Phantom of the Opera" near Broadway in Times Square. Stephanie Hughes/Marketplace

All of the people working on Broadway (and audience members) must be vaccinated. They’re also required to be masked when they're not performing. Above, an oversized mask from "The Phantom of the Opera" near Broadway in Times Square. Stephanie Hughes/Marketplace
Listen Now

Hamed Gamal was on a 16-hour layover in New York City and had never been to a Broadway show before. So he went to the TKTS booth in Times Square on a chilly afternoon in late December to try to get a last-minute ticket.

“Honestly, I just asked for a recommendation of the most American type of Broadway thing,” said Gamal. “I think I’ll go with ‘Chicago.’ ”

He was able to get a ticket, and the show went on that night. Which is no sure thing on Broadway these days. With frequent COVID-19 outbreaks among cast and crew members, dozens of performances are being canceled, and at least three shows have closed permanently: “Jagged Little Pill,” “Waitress” and “Thoughts of a Colored Man.” The cancellations come at a crucial time of year for Broadway in terms of revenue, and the period between Christmas and New Year’s is especially important. This week in 2018, for example, “Hamilton” took in over $4 million, reportedly the first time a show made that much money in a week.

“It’s so significant, in fact, that often shows will raise their ticket prices for those performances between Christmas Day and New Year’s Day,” said Steven Chaikelson, who runs the theater management program at Columbia University.

This year, theaters are taking additional measures just to try to keep the doors open. And that can get expensive.

“Oh, [there are] significant extra costs,” said Charlotte St. Martin, president of the Broadway League, which represents Broadway theaters. “It depends on everything, the size of the cast, the size of the theater. But I know it’s substantial, based on the complaining.”

St. Martin said she’s joking about the complaints, but the costs are real. Theaters are hiring additional layers of understudies, some of whom have only a few hours notice before they go on. (After a preview of  “The Music Man” last week, star Hugh Jackman praised the work of Kathy Voytko, who stepped into the lead role of Marian Paroo at the last minute. This was before Jackman tested positive for COVID-19, and performances were canceled through the end of the year.) They’re adding HEPA filters to backstage dressing rooms. And they’re hiring consultants like Blythe Adamson, an epidemiologist who runs the company Infectious Economics. She’s currently advising more than a dozen shows on Broadway on how to prevent outbreaks.

“Really, the tools that we have are vaccination, ventilation, masking and testing,” Adamson said.

All of the people working on Broadway (and audience members) must be vaccinated. They’re also required to be masked when they’re not performing. Adamson has also designed testing protocols for shows. She said many are requiring the highly accurate PCR tests of everyone — from cast members to musicians to ushers — three to six times a week.

“It’s really just considered part of doing business now in person during a global pandemic,” Adamson said. “This type of testing is necessary. We’ve seen that many of the shows that have discounted the importance of testing went on to have really serious outbreaks.”

Part of Adamson’s job is to help theaters negotiate with labs for frequent, fast, accurate tests. The goal is to detect if someone is infected before they become contagious.

But no matter how good a deal a theater gets, the costs of all those tests, understudies and air filters are generally easier for big, established shows to absorb as opposed to smaller, more experimental productions.

“It’s a business that has always been the haves and the have nots,” said Steven Chaikelson at Columbia. “[This year] that’s all been magnified significantly. The shows that typically do well are still doing quite well. And the shows that are not are suffering tremendously.”

Chaikelson is most concerned not about any one show, but the future of live theater. He said the theater ecosystem, particularly new work, relies not just on visitors from out of town, but on people who go to the theater once or twice a week. And he’s worried that they won’t come back in the same way.

Back in the TKTS line in Times Square, Tommy and Vicki Brown took a flier for “Clyde’s,” a new play by Pulitzer Prize-winning playwright Lynn Nottage. But they were hoping to see a musical.

“We’re leaning toward something not too deep or dark,” Vicki said.

So, the Browns, who were visiting from Louisiana, were considering “Waitress.”

It was the show’s last performance. It closed soon after, citing COVID cases.