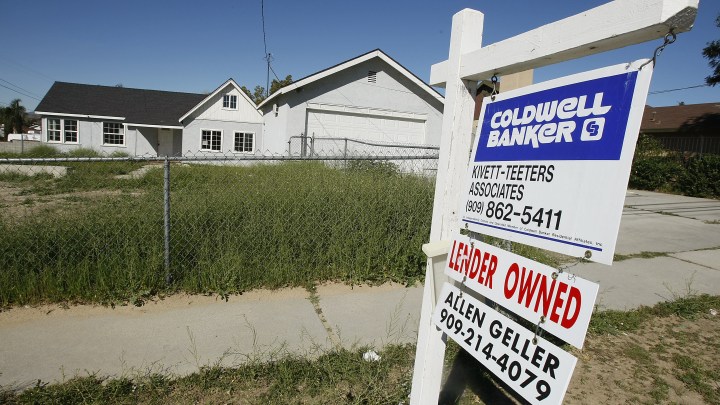 COPY
A lender-owned home for sale in Rialto, California, in February 2008. While foreclosure rates are currently at historic lows, there's been a jump in recent months as pandemic relief ends. Robyn Beck/AFP via Getty Images

A lender-owned home for sale in Rialto, California, in February 2008. While foreclosure rates are currently at historic lows, there's been a jump in recent months as pandemic relief ends. Robyn Beck/AFP via Getty Images
Listen Now

More than 45,000 U.S. properties were in some stage of foreclosure from July through September, according to property data firm Attom. That’s up 34% from the previous quarter, and 68% from a year ago, but still low by historical standards.

In a typical quarter, “we would be getting roughly three times as many loans in foreclosure,” said Rick Sharga, executive vice president at RealtyTrac, an Attom company.

A foreclosure moratorium for federally backed mortgages, along with forbearance plans that let borrowers pause their payments, have kept filings artificially low, Sharga said. But more and more borrowers have exhausted their maximum 18 months of forbearance, and the moratorium expired at the end of July.

Analysts are not expecting anything like the foreclosure crisis during the last recession and its aftermath, when as many as 10 million homeowners lost their homes. This time, the job market is rapidly recovering and home prices are still rising, said Mike Fratantoni, chief economist of the Mortgage Bankers Association.

“If a homeowner is unable to pick up their payments again, and they’re unable to qualify for modification, they honestly are going to be able to sell their home really very quickly and probably walk away with the substantial amount of cash in their pocket,” he said.

But selling still comes at a cost. It can take at least a year to rebuild credit after a serious delinquency, said James Burke, a home preservation coordinator with NCALL, a Delaware-based housing counseling agency.

“So nobody’s going to give them a new mortgage, and then all the rentals — there’s not enough inventory for these homeowners,” he said. “If they have to go to an apartment or rental home, they’re paying more than what they were paying when they owned the property.”

Delaware had one of the highest foreclosure rates in the country last quarter, and Burke said he’s gearing up for a lot more in the coming months.

“I believe in 2022 is really when everything is going to kick in,” he said. “Now that the lenders can start filing these foreclosure actions, we will be getting a major pickup.”