AMY SCOTT: If you celebrate Christmas, by now you’re probably done with all the unwrapping. Maybe nursing a few paper cuts. There’s a pretty good chance at least one of those gifts had some kind of screen and a power cord attached. The Consumer Electronics Association estimates Americans spent some $22 billion on gadgets this holiday season. That would mean those mp3 players and BlueRay-whatzits made up almost a quarter of all gifts.

Maybe you got that flat-screen TV you’ve been coveting? The makers of those devices have been coveting your business. Today three Japanese electronics makers announced an alliance. Matsushita, Hitachi and Canon say they’re linking up their liquid-crystal-display, or LCD, businesses to better compete. Sharp and Toshiba announced a similar tie-up last week.

Those screens are in ever-higher demand these days. Analysts are predicting a surge of high-definition TV purchases in the next year, before Uncle Sam switches off the analog signal in early 2009. Oh, and you know that harmonic convergence of your television set and PC you’ve been hearing about? Marketplace’s Nancy Marshall-Genzer says it’s finally on its way.

NANCY MARSHALL GENZER: Over the next five years, your TV an PC will get cozy.

CHARLES GOLVIN: There are whole range of new devices that are coming out so you can enjoy your photographs, for example, on your big screen TV set or listen to your music you’ve accumulated on iTunes through your home stereo.

That’s Charles Golvin of Forrester Research. But what if your TV and PC aren’t on speaking terms? Tech analyst Stephen Baker of NPD group says that’s the 64-gigabite question.

STEPHEN BAKER: The real challenge for the electronics companies is finding a way to make these products talk to each other in a easy way that most consumers can make happen in their home with a minimal amount of work and only a slight increase in cost and aggravation probably.

Aggravation is definitely not on the Christmas list. At least not for 59-year-old Anton Reel. He’s standing outside the Apple store in a Maryland mall just outside of Washington with his daughter Erica Sundberg-Reel. Anton Reel wonders why anyone would bother trying to network everything together.

But perhaps the real prey is 19-year-old Erica — an enthusiastic, high-tech multitasker.

ERICA SUNDBERG-REEL: Now today kids are so busy and everything it just makes it easier for us.

So, even if yuppie parents don’t want the PC in their living room, it might come anyway — invited in by their kids. 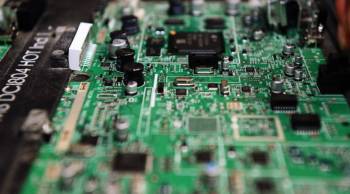