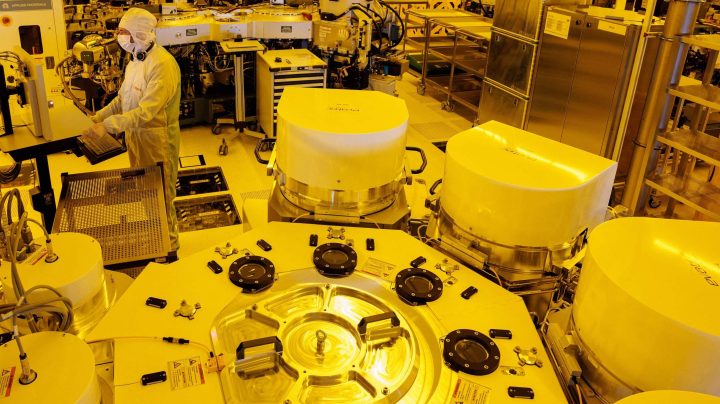 COPY
An array of machines at a semiconductor plant in Germany. Now that the CHIPS Act has passed, chipmakers are looking to build more facilities in the U.S. Jens Schlueter/AFP via Getty Images

An array of machines at a semiconductor plant in Germany. Now that the CHIPS Act has passed, chipmakers are looking to build more facilities in the U.S. Jens Schlueter/AFP via Getty Images
Listen Now

We’ve seen what happens when the supply of semiconductors runs low, given the high demand for them in building computers, cellphones, cars, coffee makers and a host of other electronics. So let’s just get chip manufacturers to make more, right? But chip factories are expensive to build, and that has deterred their creation in the U.S. in recent years.

On Tuesday, the chipmaker Intel announced what it said is a new kind of investment program to help change that situation. It’ll partner with Brookfield Asset Management to invest $30 billion in expanding Intel’s facilities in Arizona. The deal comes as a new law, the CHIPS Act, puts $52 billion toward semiconductor research, development and manufacturing in the U.S..

There’s a thing that people who work in semiconductor, or chip, manufacturing like to say: “Semiconductors are the new natural resource.”

Paula Penkal, an analyst at Bloomberg Intelligence, said people say that because semiconductors are built into so many products. And with the new federal money, states are interested in attracting chip manufacturers.

“I’ve had some states reach out to us, to me, wondering what they can do to draw business in to their state,” she said.

Penkal said there are certain things chip manufacturers need in a location: lots of space, good sources of water and electricity, low risk of natural disasters. And ideally, other chip manufacturers, even if they’re competitors.

Because, said Nina Turner at IDC, that way they don’t have to create a new workforce or bring in new support companies.

Turner said each chip factory takes a minimum of $10 billion and five years to build.

Companies aren’t selling chips from those facilities during construction, of course, so along with public money and innovative financing models, they need to be speedy.

“When you go to Asia and look at them building one of these chip factories, you’ll see them working on Christmas Day, pouring concrete, putting in structural steel and stuff like that,” said Willy Shih, a professor of management practice at Harvard.

Shih said once a company has taken the time and made the investment to build a plant, it’s not likely to move anytime soon.

Which means the jobs should be there too.