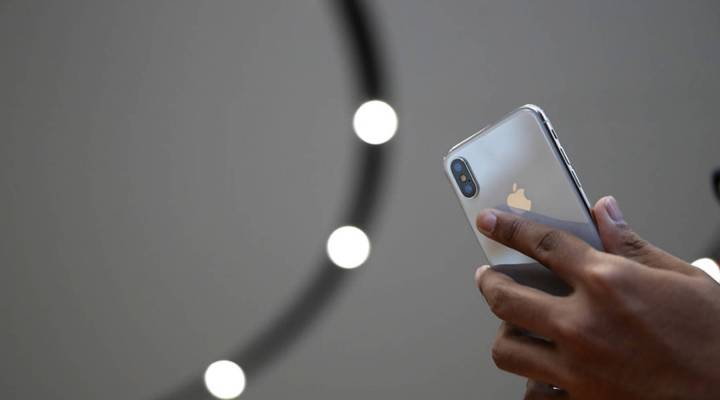 COPY
An attendee looks at a new iPhone X during an Apple special event at the Steve Jobs Theatre on the Apple Park campus on September 12, 2017 in Cupertino, California. Justin Sullivan/Getty Images
Marketplace Tech Blogs

An attendee looks at a new iPhone X during an Apple special event at the Steve Jobs Theatre on the Apple Park campus on September 12, 2017 in Cupertino, California. Justin Sullivan/Getty Images
Listen Now

Most people are looking at the new iPhones and thinking about the camera performance, the size of the screen, the notch situation. But we nerds here at Marketplace Tech will be thinking about the semiconductor. Yeah, many people will probably ignore the part in Apple’s new gadgets announcement today about the A12 processor and what a big difference it’s going to make for speed, performance and battery life. But these guts are actually what set Apple apart — and ahead — of other smartphone makers, because Apple designs its own semiconductors for all its mobile devices. Anshel Sag is a semiconductor analyst at Moor Insights and Strategy. Molly Wood asks him what the benefits are of making your own chips. The following is an edited transcript of their conversation.

Anshel Sag: It allows them to actually design both their hardware and their software in the most optimal way, both in terms of getting the best performance out of the device, but also optimizing the cost of manufacturing that device, which is a very unique advantage that they have.

Molly Wood: What’s so interesting too is that it’s almost like Apple has its own stealth business inside its business. I mean, they don’t license these chips, but presumably they could at any point, right?

Sag: Yes, that’s absolutely true. They do license a few components here and there, or at least the IP. But most of the designs are custom, and they’ve done a very good job of improving performance almost unrealistically, but somehow magically, they’ve been able to achieve this every single year by double-digit increases. And it’s kind of baffled the industry because no one’s been able to keep up with it.

Wood: Are there any downsides, any inefficiencies that are created, or potential trouble spots by trying to do so much vertical integration?

Sag: I think the biggest problems that they could run into is what happens when they make a mistake and a chip ends up not being perfect and then that mistake could be reproduced 100 million times and could become a very big issue. I think that might be the biggest concern, is what happens if something goes wrong? Because if you have multiple chip suppliers you can always switch to another chip supplier for something, like a modem.

Wood: You mentioned the sort of, you know, the magical speed-to-size increases that Apple seems to pull off every year with its chips. How much does that business influence the semiconductor industry at large?

Sag: I actually consider it very influential, especially when you look at the mobile industry, because they’ve pushed others to try harder. And even when the mobile industry kind of leveled off, there was still this silent battle among all the chip makers, between Qualcomm and Apple and Samsung and even Huawei. They’ve all been really trying to compete with one another to push the envelope on performance, even if the user doesn’t really see a difference. And some companies like Huawei have even cheated on benchmarks just to make it look like they’ve done faster and better than everybody else.