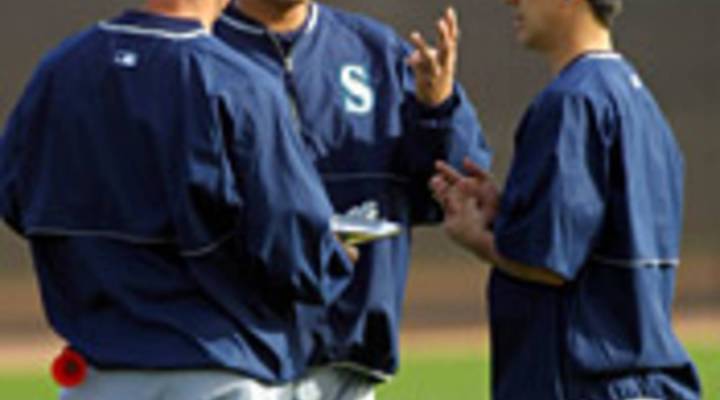 Doug Krizner: Tonight the biggest sluggers in Major League Baseball will swing in the All-Star Home Run Derby. America’s pastime is at an international crossroads. Foreign-born players make up about 30 percent of Major League rosters. That trend has created a business. Marketplace’s Nancy Farghalli reports.

Nancy Farghalli: Behind every baseball player is someone telling him what to do. That’s according to baseball economist J.C. Bradbury.

J.C. Bradbury: They have a coach basically for every defensive position. You got ones that are in the batters box. Some are with pitching. You’ve got your hitting coaches . . .

Major League Baseball doesn’t allow interpreters on the mound during the game, but economist J.C Bradbury says translators are a growing presence in the clubhouse, going to press conferences, attending team meetings.

Baseball teams, he says, have learned from history.

Bradbury: Initially in the ’60s when Masanori Murakami came over from the Giants there were all sorts of language issues and that largely led to him wanting to go back home simply because when he signed his first contract, he couldn’t even read a word of English on it, he didn’t have anyone to help him.

But Major League’s recent push into Japan and China is changing that. Now the Yankees have two Asian language interpreters. The White Sox have one and the Dodgers have Scott Akasaki.

Akasaki watches batting practice from the dugout. He’s the manager of team travel.

Scott Akasaki: You can’t just get someone who speaks Japanese and English put them in a baseball setting and all of a sudden they can understand what a rundown play and a pickoff is. So you need somebody who not only knows English and also the baseball lingo.

Akasaki knows Japanese and baseball, so he translates for the Dodger’s all-star closer, Takashi Saito. And Saito says through Akasaki that having a translator is a necessity.

Akasaki: Oh he says certainly if the interpreters is not a good interpreter, then there’s going to be a lot of misunderstandings and it’ll make me look bad.

Akasaki says he doesn’t get paid to interpret for Saito, but on some teams, full-time translators can earn six figures.