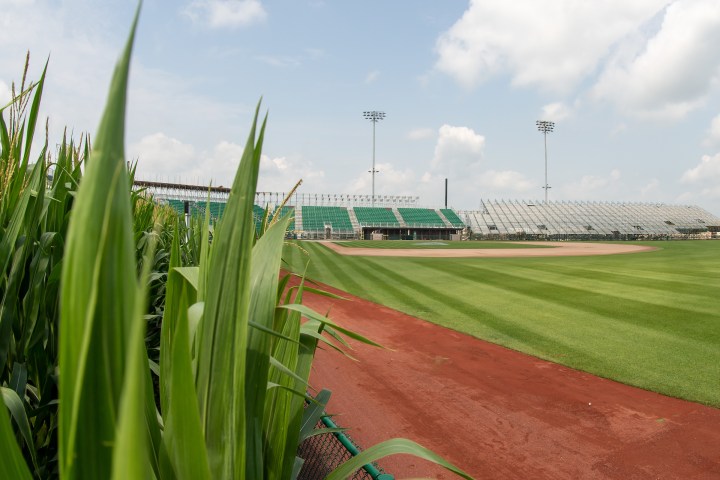 COPY
The major league field at the "Field of Dreams" movie site in Dyersville, Iowa. Photo by Quinn Harris/MLB Photos via Getty Images

The 1989 movie “Field of Dreams” is really a celebration of baseball. The monologue at the end given by Terence Mann, the character played by James Earl Jones, brings the message home: “It reminds us of all that once was good. And could be again.”

Now, Major League Baseball is using “Field of Dreams” to bring more people to the game. Tonight, the Yankees and White Sox will play a game on the site where “Field of Dreams” was filmed, in eastern Iowa. The teams will don historic uniforms, there will be a manual scoreboard, and players will enter the field from the corn field, just like they do in the film. All this spectacle is meant to help America’s pastime overcome declining attendance and lower television ratings.

“The idea is that we can use this as a vehicle to reach a younger audience that’s increasingly distracted and fractured across a lot of different platforms,” said Chris Marinak, chief operations and strategy officer for Major League Baseball. “Hopefully, this cuts through some of that clutter.”

“We really have to do something that’s over the top to reach that [younger] group,” said Marinak. “This isn’t just your everyday baseball game, it’s something much more than that.”

Currently, baseball is most popular among people who are older, as well as young kids. But people in the coveted 18 to 45 age bracket don’t watch as much.

It might seem odd, then, that Major League Baseball is using a 32-year-old movie to reach that audience.

But Andrew Zimbalist, who studies sports economics as a professor at Smith College, says if baseball tried to create an event that specifically targeted young people, it might feel contrived.

“Instead they’re hoping to make this a must see event for older people,” said Zimbalist. “The older people, of course, will get so excited about it, that they’ll bring their children and their grandchildren along to watch as well.”

But not everyone is sure it will work.

“Is it going to be cool and great? Are the decision makers who decide to do it, are they going to be thrilled and is it going to give them all those cool tinglies from when they were kids? Sure. I’m just not sure it’s long term going to do anything for the game of baseball,” said Nola Agha, a professor of sports management at the University of San Francisco.

It’s an expensive gamble for Major League Baseball, which spent $5 million constructing the field. That doesn’t include the cost of transporting or housing the players and crew.

And it’s an expensive ticket, too. The cheapest seat went for $375.

So, Major League Baseball executives are sure to be using another quote from “Field of Dreams” as a mantra: “If you build it, they will come.”