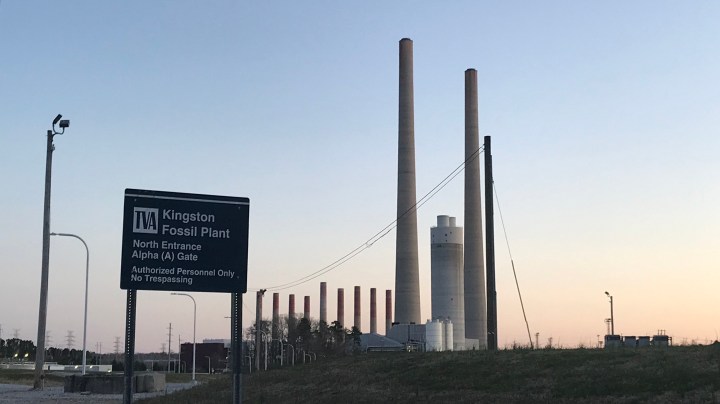 COPY
In December 2008, more than 5.4 million cubic yards of coal ash were released from a holding pond at the Kingston Fossil Plant in Harriman, Tennessee. Lily Jamali/Marketplace

In December 2008, more than 5.4 million cubic yards of coal ash were released from a holding pond at the Kingston Fossil Plant in Harriman, Tennessee. Lily Jamali/Marketplace
Listen Now

Ansol Clark was suffering from a blood cancer called polycythemia vera when we met at his home in 2020.

“I’m not doing very well. I have real bad dizzy spells and stagger around a lot,” Clark said in an interview.

Clark was among the first workers on the scene at the Kingston Fossil Plant in Eastern Tennessee just before Christmas in 2008, when more than 5.4 million cubic yards of coal ash burst out of a holding pond belonging to the Tennessee Valley Authority, the regional utility.

Coal ash is a byproduct of burning coal to generate power.

Clark was a fuel truck driver and spent five years helping clean up the mess, one of the largest toxic disaster cleanups in American history. He’s one of hundreds of workers who say they became sick cleaning up toxic sludge from the spill. Clark said he became visibly ill early on.

“You get a cough, sneeze black stuff out of your nose. Your eyes water and you can’t get rid of it,” Clark said.

The TVA hired Jacobs Engineering — now called Jacobs Solutions — to oversee the cleanup, which included dredging the coal ash from the Emory River. Dozens of workers sued the company, including Clark, who said Jacobs didn’t provide adequate safety equipment for this job and that workers were not allowed to wear their own.

“They would fire you and remove you from the site for wearing a dust mask. Then after, they would threaten us, then they’d tell us how safe it was, [that] you could eat a pound of it a day,” Clark said.

Clark told me those threats came from a supervisor at Jacobs, which declined to be interviewed for this story. But the company said in a statement that it complied with all regulatory guidelines and industry best practices during the cleanup. It also said that a significant number of plaintiffs had their medical conditions long before they started working at Kingston.

Ansol Clark said he was in good health when he started working at the site, as were many of his co-workers.

“Forty-seven people died that I worked with side by side,” Clark said.

That was in 2020. Ansol Clark himself died last year, adding to the climbing death toll among workers. Hundreds more are sick; many — like Clark — with various forms of cancer. Coal ash is now known to contain a slew of toxic elements, including arsenic, selenium and lead. Radioactive elements have also been discovered at this particular spill.

Avner Vengosh, a geochemist at Duke University, said coal ash was dangerous for the cleanup workers but can also harm communities where it’s stored. His team has found evidence of groundwater contamination from coal ash at a dozen sites in the Southeast.

“The more we study this, we see that the impact is much wider than we previously thought,” Vengosh said.

Coal seemed to be a cheap, available energy source, “but now we pay the price of the legacy of the coal ash,” he added.

Few rules are in place to prevent another spill like Kingston’s, according to Jamie Satterfield, an investigative journalist who has documented workers’ health struggles and their efforts to get compensated for years.

In 2018, a federal jury handed workers a victory by finding that Jacobs failed to exercise “reasonable care” to keep workers safe.

The next phase to determine whether the company’s actions made workers sick has yet to get underway amid a barrage of appeals from Jacobs.

“If they get a verdict in which a jury concludes coal ash is dangerous enough to cause these kinds of diseases, that puts every producer of coal ash on notice that they’re now going to have start telling people that it’s dangerous,” Satterfield said.

In May, a federal appeals court ruled Jacobs’ status as a contractor for the TVA did not make it immune from the lawsuits from workers.

Meanwhile, the Tennessee Supreme Court is weighing the company’s latest effort to block the workers’ cases by classifying their injuries as stemming from silica.

Ansol Clark’s widow, Janie, said those who helped in the cleanup deserve a win in court.

“Ansol’s passed away, but there’s other workers that are all getting older, and I’m concerned that they won’t be here to ever see anything happen,” she said.

At the very least, she wants people to know what happened in Kingston — because another spill could happen anywhere coal ash is stored.