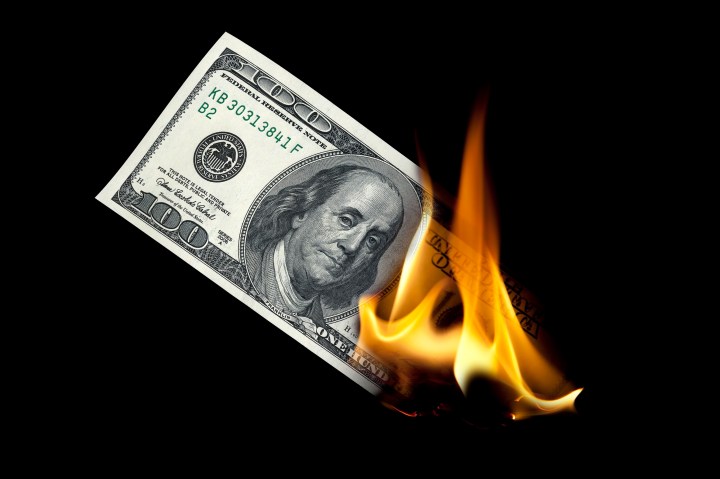 There are other ways to get inflation under control. sbayram/Getty Images
I've Always Wondered ...

There are other ways to get inflation under control. sbayram/Getty Images

If inflation is an issue due to too much money in circulation, why can’t [the Federal Reserve] just burn off money to offset inflation?

Inflation rose 8.3% year over year in August; in June it reached a 40-year high of 9.1%. Sure, the Federal Reserve could do whatever it wants with the money it has in its possession, said Ahmed Rahman, an associate professor of economics at Lehigh University.

“They could have a nice bonfire in front of the Federal Reserve building,” Rahman said. “Sort of a big gesture of ‘We’re serious about inflation.’” But before creating such a bonfire, the Fed needs to buy the money back.

“That’s the real key to the goal of tamping down inflation,” he explained. “The Federal Reserve can’t simply confiscate money willy-nilly.”

The Fed can get money back in two ways, said Laurence Ales, an associate professor of economics at Carnegie Mellon University. One is by selling you something, like Treasuries. These are loans that you are making to the government in return for interest payments.

“It’s not stealing your money — it’s giving you something in return for it. That’s the nature of the trade,” said Ales.

The other action the Fed can take is one that you’re likely familiar with since it’s happened five times this year: raising interest rates,

“By raising interest rates, people are less likely to borrow money,” said Alan Gin, an associate professor of economics at the University of San Diego. “That, in effect, basically reduces the money supply.”

Take the mortgage market, for example. The Fed’s interest hikes make loans, like mortgages,  more expensive. And that stops the circulation of money that would have been created through the loan, Ales explained.

Right now, the 30-year fixed-rate mortgage is almost 6.3%, the highest rate since 2008,  according to data from Freddie Mac. We’re seeing signs that the housing market is cooling down, with existing home sales falling 0.4% and home prices rising at a slower pace than earlier this year.

Let’s go back to the bond market for a minute. Rahman of Lehigh University said that if the Fed burned money or money was accidentally destroyed in a fire, it wouldn’t affect the bond market. What the Fed wants to ultimately do is twofold: “It wants to increase the amount of bonds out in circulation, [and] it also wants to lower the supply of money in circulation,” he said.

So it’s been increasing the amount of bonds by offloading its balance sheet. Beginning in June, the Fed started reducing its holdings by $47.5 billion a month, and upped it to $95 billion this month.

“The supply is higher, so the value is lower. That’s how they entice people to buy the bonds in the first place: They sell those bonds at a discount,” Rahman said.

Rahman said he thinks the Fed at this point “is doing exactly what it should be doing,” although some believe the Fed should have taken action earlier. And others question the Fed’s plans to continue raising rates, since it could lead to a recession and increase unemployment.

Gin noted that while the Fed is trying to slow down the economy so people don’t buy as many goods, their actions may have less of an impact on food prices, which have jumped 11.4% year over year.

“Food is being impacted by outside events like weather, and the war in Ukraine, and animal diseases,” he said. For example, he said, there’s an avian flu outbreak in the United States that’s resulted in the deaths of nearly 45 million chickens and turkeys, leading to a surge in egg and poultry prices.

Raising interest rates won’t help with that, Gin said, although it is already helping in nonfood areas, like the housing market.