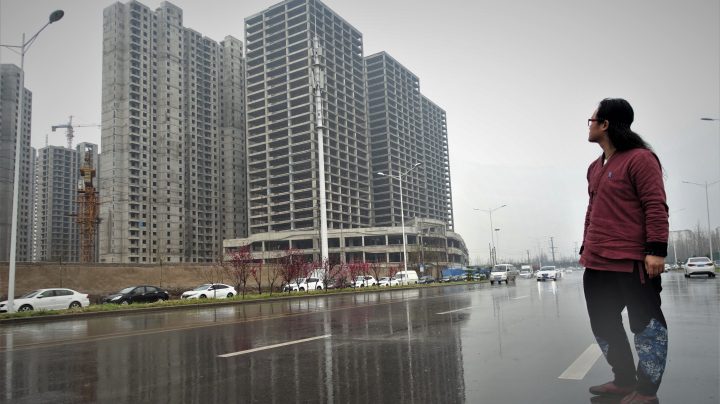 Chinese folksinger and songwriter Chen Peng bought a presale condo in the central Chinese city of Zhengzhou seven years ago.

Today, his two-bedroom is still under construction. Chen’s condo is among the Qifu City development’s 6,000 units.

“All the buildings have roofs except for two. But only the building frames are complete,” Chen said, adding that construction stopped in 2019.

“Some people say the developer squandered the money in Southeast Asia. That’s the rumor,” Chen said. The Qifu City property developer did not respond to Marketplace’s questions.

China’s real estate firms are in financial distress. According to a list on GitHub, there are some 340 unfinished housing projects across 113 Chinese cities as of this week. A lot of them are concentrated in Zhengzhou.

Although few Americans are investing directly in Chinese property, the sector affects everything in the world’s second-largest economy. In fact, the fallout has ripple effects in the rest of the world — including the U.S.

Some people who bought those unfinished homes are pushing back.

Chen has petitioned local officials, protested and then was detained for three days, as Marketplace reported. He even released a song about the injustice homebuyers face, but it changed nothing except that his song is now censored online.

Like many people in China, Chen bought the two-bedroom condo before full construction started. On a 600,000 yuan (or $86,000) purchase price, he put down a massive 50% deposit. That money was meant for the construction, but the funds are gone.

“Even though homebuyers put a lot of money down for the project, the real estate developer still has no money to finish the construction,” Chen said.

“I used to think a home mortgage was like a business loan. You have to pay the bank back whether everything works out or not. But now, when I think about it, the banks are just dumping all the risks on the homebuyers.”

Real estate firms had access to easy credit from the banks, and citizens had an insatiable demand for property. That’s because Chinese families’ investment options are limited, and owning a condo is essential for marriage and educational prospects.

The housing bubble was sustained because — collectively — property developers, Chinese banks and citizens had faith that home prices only went up.

“A few years ago, when a new project came on the market, it would be sold out immediately. Homebuyers felt they had to buy right away because prices might keep going up,” said first-time homebuyer Daisy Wang.

In October, she and her husband paid a premium for a presale condo in a Zhengzhou city development called Xitang because it was near good schools. Construction stopped two months later due to lack of funds.

“I was shocked,” Wang said.

China’s real estate firms have spent recklessly for decades. The most notorious is property giant Evergrande, which had invested in electric vehicles, a water bottling company and a soccer team.

A few dozen homeowners took to the streets to air their grievances against the Xitang developers, but construction has not restarted. That project’s developers have refused to answer questions from Marketplace.

If Wang were in the U.S., she could default and perhaps lose the usual 10% deposit. But in China, people typically come up with a 30% down payment and start loan payments even before the condo is complete. In Wang’s case, her parents and in-laws paid the bulk of the down payment.

Now that China’s economy is slowing down, owners of unfinished condos have become more vocal.

People like musician Chen are fed up. He used to max out his credit cards and once survived on potatoes for 72 days straight — just to make his mortgage payments.

“I used to think a home mortgage was like a business loan. You have to pay the bank back whether everything works out or not,” Chen said. “But now, when I think about it, the banks are just dumping all the risks on the homebuyers.”

Chen has stopped paying his mortgage, which is not a decision taken lightly in China.

Entrepreneur Shane Wu in Beijing defaulted on his home loans a few years ago, when his business ventures went bad. He’s now on a so-called discredited or “deadbeats” list, which bars people from luxury spending, such as riding bullet trains, flying or sending their children to private school.

“I am like a socially dead person. Debt-collecting agencies keep calling me, my friends, my family and everyone on my contact list,” Wu said. “They all know I went bankrupt, which makes it hard to restart my life again.”

It is hard to say how many people there are involved in a mortgage boycott. Chinese officials who do not want more homebuyers to join the protest are censoring social media posts about boycotts. However, local governments — including Zhengzhou’s — have ordered developers to resume construction on unfinished homes in the coming weeks.

“My life in the past few years has felt like I’ve been living in a swamp. I did not have a good income, and yet I still needed to pay the mortgage,” Chen said, adding that he will only start repaying the loan once construction resumes on his condo.

“Until then, everything is just empty talk,” he said.