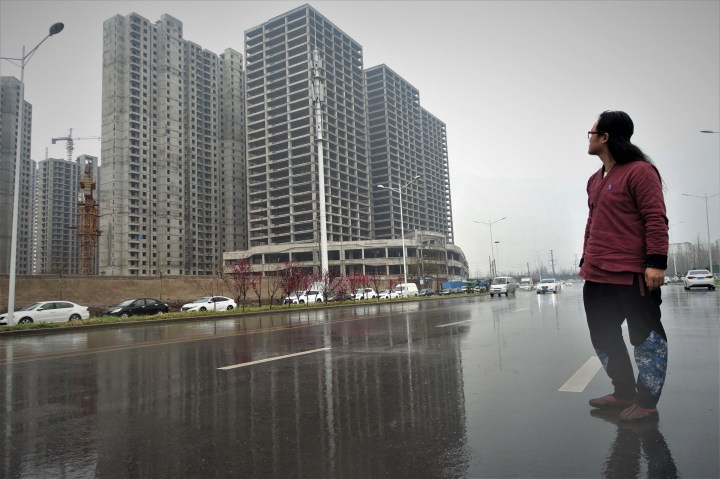 COPY
Singer Chen Peng looks on at an abandoned condo development where he has bought his first home. He is not sure if he will ever have a chance to live in it. Charles Zhang/Marketplace

Singer Chen Peng looks on at an abandoned condo development where he has bought his first home. He is not sure if he will ever have a chance to live in it. Charles Zhang/Marketplace
Listen Now

Still, the 35-year-old jokes with his friends that his financial situation has remained unchanged from the COVID-19 pandemic because it has always been difficult for musicians like him to make a living off music in China.

“The pandemic does not have much impact on me because my livelihood was already at the bottom,” Chen said.

Despite this, his parents continue to place enormous pressure on him to own property. Many Chinese citizens see property as the safest investment.

Even during the pandemic, the housing market has, similar to the U.S., not waned. Real estate investment in China for 2020 increased at a robust rate of 7% from a year earlier.

As of 2019, real estate accounts for 70% of household wealth in China. Part of the reason is there are limited alternative investment options for Chinese citizens. There is also a public perception that the Chinese Communist Party will not allow home prices to drop because, if it did, that could wipe out most citizens’ main source of wealth and possibly trigger unrest.

However, if you ask people like folk singer Chen, real estate is not always a sure bet.

“Buying a property was more my parents’ idea,” Chen said. “My parents have been urging me to get married, and it is easier to find a wife if I have an apartment, so they gave me some money.”

In 2015, Chen’s journalist friend got him a media discount on a yet-to-be built condo development in Zhengzhou city. Market prices for a 968-square-foot place back then were between $111,000 and $125,000, but he could get one for two-thirds of that price through his friend. The only catch was he had to put a 50% down payment instead of the usual 30%.

“I bought the condo because of the discount and because the payment term was stretched out, which meant I could focus on making my debut album,” Chen said.

Six years later, his album, called “Five Flavors of Life,” has been released.

However, his condo is a shell of a building among dozens of others. On a recent visit, construction cranes sat idle. No workers were in sight.

“Simply put, even though [homeowners] paid a lot as down payment for the condos, the real estate developer has run out of money and cannot finish the project,” Chen said.

This type of abandoned construction is common enough in China that there is a name for it in Chinese called lanwei lou — meaning “a rotten tail building.”

Chen laments: “I’m already dead in a social sense. My body is alive, but my life is destroyed,”

He feels destroyed because he used his life savings, a chunk of his parents’ money plus credit cards to make the down payment of 300,000 yuan ($46,000) in 2015, which was more than 5.5 times the average annual salary at the time in Zhengzhou city.

Also, without a property in an upscale area, Chen will struggle to find a wife, and there is little hope of getting his future children into a good school.

Real estate means everything in China.

There are those, such as fruit farmer Ma Zuyou in Shanghai, who have struck it big. He said he only invests in property and land.

Ma grows grapes, honeydew-like melons and watermelons, but he said farming doesn’t bring in much income. Instead, the big money is in demolition and compensation. China’s urban expansion means a village today can turn into a shopping mall tomorrow.

Initially, Ma confirmed that he took over the fields in a Shanghai suburb because he got a tipoff that the government might build a road there. However, in front the microphone during the interview, he became a bit coy.

“I just got lucky that the government will build a road through parts of my land,” Ma said. “About 80 mu [13 acres] of my watermelon and grape fields will be used.”

In China, all land is owned either by the state or a rural collective, and people like Ma purchase land-use rights. They own whatever building or crops are on that piece of land, which is what Ma is being compensated for.

He is also excited about the demolition and relocation work in his native central Anhui province.

“Our family home is near the county seat, which is expanding to build apartments,” he said. “The compensation was based on the size of the home.”

Ma rebuilt his family house of about 7,500 square feet.

“I built the house bigger in hopes of getting more compensation,” Ma said.

He has not been notified of demolition and relocation yet. Unfortunately, Ma said, the compensation will now be calculated on headcount per household rather than the size of homes.

While Ma lucked out with his fields, he has two storefronts he has not been able to sell.

He also leases his apartment in Shanghai, but the rent is not enough to cover his monthly mortgage payment.

Ma would not say how much compensation he will get for a portion of his fields, but he said it should be enough to pay off his mortgage in Shanghai.

Back in Zhengzhou city, the developer of the abandoned condo project told the Henan Business Daily that there should be a solution plan from the government this month.

Homeowner and singer Chen is desperate to have construction on his condo started again. He said he and other homeowners have contacted their Communist neighborhood committee and petitioned the local government repeatedly without any resolution.

Last year, Chen participated in a protest at the construction site.

“We just held banners and shouted some slogans,” Chen said. Police accused them of illegal gathering, he said. He was detained for three days.

“I am a Communist Party member. I used to think that all problems were caused by corruption [or] caused by a few bad people and not with the Communist Party itself. But after my detention, I think a lot of things need to be reexamined,” Chen said.

Chen said he felt hopeless and wrote a song about his bad property-buying experience.

The unreleased song is called “Yellow Vests and Blue Vests.”

“I wore a yellow vest when I protested and a blue vest while in police detention,” Chen said.

The song is about the injustice homeowners like him have faced.

“Why did we buy the condos? Protest on the streets? We want happiness and justice,” Chen said. “Instead, we were met with police brutality.”

Chen has kept his parents in the dark about the condo issues. He said times are so tough, he has been living off just potatoes.

“I ate potatoes for 72 days and lost about 20 pounds,” he said. He is still paying the mortgage on a home he may never live in.