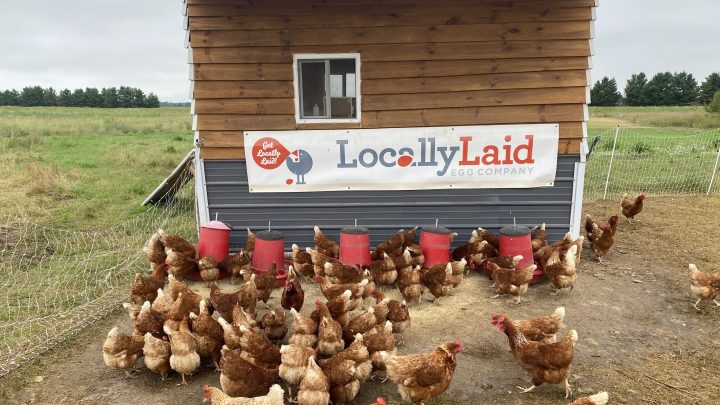 At 5:40 a.m. on a recent Saturday near the little town of Wrenshall, Minnesota, the chickens on the Locally Laid egg farm were getting restless.

Most people on vacation would still be snoozing. But not Klay Jaeger and his 9-year-old son, Isaac. For them, it was time to let out the chickens.

“Good morning!” the elder Jaeger shouted as he opened the door to one of two big coops. “Just come on out!” Isaac added.

For about $50 a night, the Jaegers slept in a small outbuilding in the chicken yard. It’s two-thirds bunkhouse, one-third chicken coop — separated only by a couple of panes of glass.

Farm tourism is a rapidly growing industry; think attractions like vegetable stands and pumpkin patches. Now, some farmers are offering tourists a more intimate experience — one that involves sleeping and even working on the farm.

Klay and Isaac Jaeger could actually see the chickens while they were sleeping, and vice versa. “It’s weird having chickens stare at you. But … you get used to it,” Isaac Jaeger said.

Lucie and Jason Amundsen started their “pasture raised” egg business 10 years ago. They raise 400 chickens themselves and contract with seven larger farmers who produce eggs for their brand. They also grow pick-your-own berries.

They call this new venture their AirB-N-Bawk! The idea came from an article Lucie Amundsen read about a business in Scotland in which guests sleep in an apartment above a bookstore at night and volunteer at the shop by day.

Along with the bunkhouse, the Amundsens built what they call the Perch, a tiny house on stilts in a patch of woods next to the chicken yard.

Both are rustic. Neither has running water; guests use an outhouse. But they’ve proven popular since they opened earlier this summer.

The Amundsens estimate they’ll earn about $13,000 this year renting both out, enough to add nearly 20% to the farm’s annual profit.

“That’s real money for a farmer,” Lucie Amundsen said. “There is kind of a sad commentary there, that raising food with integrity isn’t quite enough anymore.”

“It’s just endless expenses,” said Jason Amundsen. “So this is a nice way to cover that overhead.”

The Amundsens’ farm rentals are part of the rapidly growing agritourism industry. The U.S. Department of Agriculture estimates that the sector — which includes everything from corn mazes and farm-grown dinners to dude ranches — has grown to nearly a $1 billion industry.

As the number of Americans who work on farms has dwindled, Dawn Thilmany, a professor at Colorado State University who researches agritourism, said the number of people seeking out ways to experience agriculture has surged.

Thilmany initially had a hard time wrapping her head around that idea. She grew up on a soybean, corn and pig farm in Iowa. She couldn’t wait to head to the big city and leave farm chores behind.

For the Amundsens, vacation rentals have helped the bottom line. But they also reawakened their enthusiasm for farming.

“Oftentimes, we’ll be falling asleep and we just hear laughter on the fields,” Lucie Amundsen said. “I did not expect that much joy from this.”