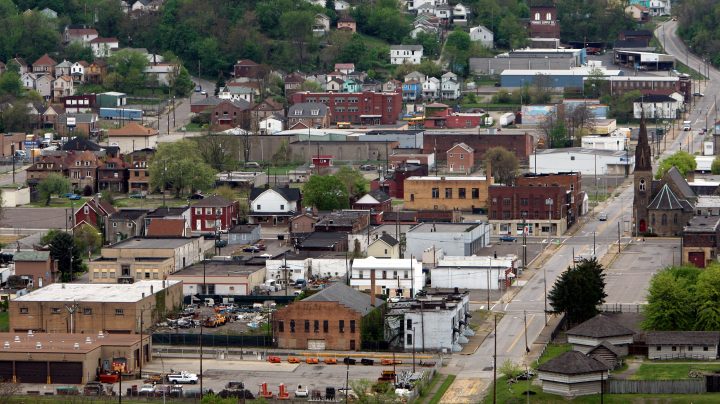 COPY
Towns with one main industry have been particularly hurt by globalization. Above, Steubenville, Ohio, sits near the Ohio River. Rick Gershon/Getty Images

Towns with one main industry have been particularly hurt by globalization. Above, Steubenville, Ohio, sits near the Ohio River. Rick Gershon/Getty Images
Listen Now

The Trade Adjustment Assistance program has been a safety net for workers hurt by trade competition since 1962. In July, 60 years after it was introduced, it stopped accepting new applications.

Kara Reynolds, an economics professor at American University, joined “Marketplace’s” Kai Ryssdal to talk about what it means to lose this program, and what may — or may not — come next.

Kara Reynolds: At the time [of the TAA’s introduction], the United States and countries around the world were engaged in a series of trade negotiations to lower trade barriers, and the Trade Adjustment Assistance Act was really designed to protect those workers who are losing their jobs due to trade because of the increase in imports associated with the decrease in tariffs.

Kai Ryssdal: So in the broad sweep of history, has it worked?

Reynolds: So the goal of the program was really twofold: It was to make sure that workers find new jobs and at a comparable income level. And the evidence is really mixed on the degree to which the program’s been successful. There has been some evidence that workers have benefited. My impression is that it’s mostly workers who have actually been able to participate in some of those training programs. And, unfortunately, in a lot of towns, there’s just not a lot of training opportunities available.

Ryssdal: The thing about Trade Adjustment Assistance, from my perspective as a guy who’s covered this for a long time, and, in fact, who literally got this answer from President Obama when I asked him about it, if I could name drop here for a second, is that politicians of either stripe, when asked about the challenges of free trade, would say, “Oh, we’ve got Trade Adjustment authority, don’t worry about it, we’ll get you training.” And it seems that that has had mixed success, right?

Reynolds: I will say that even though the stated goal was to find these workers new jobs, the unstated goal was really to get politicians to vote for these new trade agreements, right? So, in that sense, it has been successful. We liberalized trade for 30 years. But I think, like many of our worker training programs, actually, it’s just a very challenging task to try to help workers adjust into new industries.

Ryssdal: Honestly, I didn’t know that this was happening. And it’s my job. I didn’t know that it was going away until I read that piece in The New York Times by Ana Swanson. It seems to be being allowed to just wither as opposed to actually being ended. Right? And it’s just kind of dripping away.

Reynolds: Yeah, honestly, I didn’t know it was happening either. And it’s also my job. Usually, the money for this program, or attention to this program, comes about when we are forming new free trade agreements. But we’ve really lost our tastes for new free trade agreements, right? The last one would have been the Trans-Pacific Partnership Act, the TPP, that we decided not to even attempt to pass. And so I think that’s one of the reasons why no one’s really been paying attention to the program.

Ryssdal: So do you expect that this is just it? And that, given our attitudes and how we feel about free trade, this program is kind of done and we’re not going back?

Reynolds: You know, there is kind of like this anti-globalization viewpoint. I would think that, given that viewpoint, there would be more efforts to help workers who have lost their job due to trade. Even though we’re not forming new free trade agreements, globalization isn’t going away, and they’re still increasing import competitions. I’d like to think that, if not the TAA program, that this is something that we’d pay attention to and think of other ways to help workers adjust.

Ryssdal: If I’m a 50-, 55-year-old worker who sees their job possibly going away, do you think I’m just out of luck?

Reynolds: I mean, is it pessimistic of me to say yes? I mean, it’s just a hard population to serve.