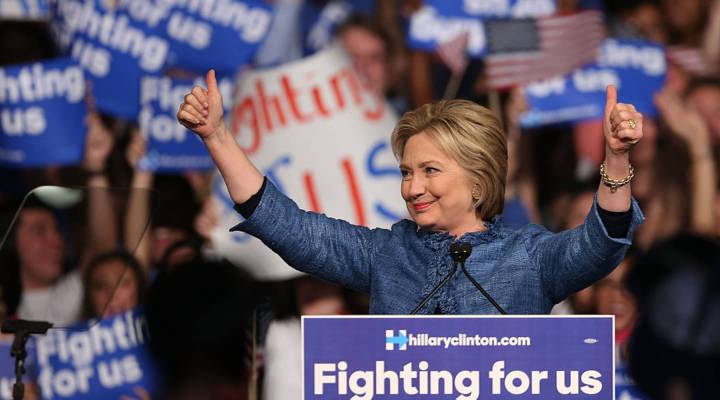 COPY
Democratic presidential candidate Hillary Clinton has been called out by her opponent Bernie Sanders for her stance on the TPP trade deal.  Joe Raedle/Getty Images
Economic Anxiety Index®

Democratic presidential candidate Hillary Clinton has been called out by her opponent Bernie Sanders for her stance on the TPP trade deal.  Joe Raedle/Getty Images
Listen Now

International trade and trade agreements have become a major issue on the presidential campaign trail, largely thanks to heavy criticism from Republican Donald Trump and Democrat Bernie Sanders. Neither of the candidates support the Trans-Pacific Partnership, a pending trade agreement between the U.S. and 11 other countries. And while “trade friendlier” candidates Hillary Clinton and John Kasich notably won Ohio on Tuesday, the primary season has, at times, felt like a referendum on free-trade policies.

In addition to confusion over the economic impact of trade agreements, respondents were more likely to disagree than agree with the statement that free trade helps their personal financial situation.

“Policy makers tend to talk about trade in mercantilist terms. So, ‘exports good, imports bad,’” said Susan Ariel Aaronson, a professor at George Washington’s Elliott School of International Affairs. “But the truth is, you can’t produce anything in the U.S. without some imports.”

There needs to be a much more honest discussion about the merits and costs of trade, she said, as well as improved understanding of the governance function of trade agreements.

While increased trade may result in options and cheaper prices for consumers, those benefits are typically diffuse and difficult to see. On the other hand, the impact of a worker losing a job due to increased competition is much more tangible.

Howard Rosen, the executive director of the Trade Adjustment Assistance Coalition, says traditional trade theory has two basic parts. The first is opening the borders, often by lowering tariffs or other barriers through a trade agreement. That spurs competition, which typically lowers prices. In econo-speak, it can “free up resources,” said Rosen.

“That’s a nice way of saying that there’s unemployment, people moving out of redundant industries,” he said. “But we’re also opening up foreign markets to U.S. producers, so you’d expect to see a shift of those redundant resources into the expanding parts of the economy.”

That movement of workers from shrinking industries into expanding ones is where Rosen said theory breaks down in practice.

“When you want to talk about labor mobility, it’s one thing to talk about software programmers who kind of move seamlessly between Austin and Silicon Valley and Boston,” said Gordon Hanson, a professor of economics at University of California, San Diego. “It’s quite another thing to talk about workers with a high school education or less who started off in a factory job.”

Because of the regional nature of the U.S. economy, Hanson said if a furniture maker in Raleigh Durham, for example, lost his or her job, it could be challenging to get another position in the same area. Relocating can be difficult, especially if home values fall along with the local economy.

­When Hanson and his colleagues studied the impact of increasing Chinese imports on the U.S. labor force, they found the “adjustment period” was significantly longer than economists had assumed.

But he said that’s an argument to better support workers through their transition, not close the borders.