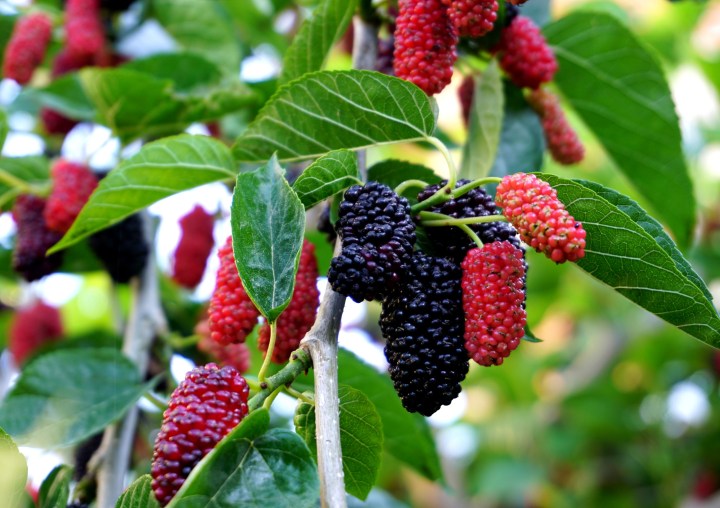 Mulberries are ripe when they fall off the tree. altanakin/iStock/Getty Images Plus
I've Always Wondered ...

Mulberries are ripe when they fall off the tree. altanakin/iStock/Getty Images Plus

Why are mulberries not sold in retail stores? We love the berries that are available, but man, mulberries are delicious, and we moved away from the neighborhood with some trees in it and we miss them!

Some people have been fortunate to grow up with mulberry trees in their neighborhood. But if you’re not familiar with the delicate, tart and sweet fruit of the mulberry tree, you’re not alone.

While mulberry trees are easy to grow, the fruit is difficult to harvest and has a refrigerated shelf life of two to four days. That’s why most grocery stores don’t carry them.

The mulberry looks like an elongated version of the more popular blackberry, almost conifer shaped, and grows on several species of the tree.

Jan Doolin, a mulberry expert from Lakeland, Florida, said the fruit tastes like a cross between a blueberry and blackberry, maybe with some raspberry mixed in.

Or, perhaps, it’s that all those fruits taste like the mulberry, an often underappreciated fruit that lacks the recognition of its grocery store-staple counterparts.

Doolin, who grew up in Lakeland, has fond memories of climbing her family’s big mulberry tree as a child and tasting the fruit. She began collecting mulberry trees six years ago, and now has 70 of them in 50 varieties on her acre of land.

But it’s not impossible

Fruits generally ripen between the spring and summer, depending on the type of mulberry tree.

Frog Hollow Farm — a 280-acre farm based in Brentwood, California — has found a way to harvest mulberries and sell them fresh to some grocery stores in the state.

“Mulberry trees love to grow, especially here in this hot summer climate,” said owner Al Courchesne. “They love it here. So all you have to do is give them adequate water.” And lots of space.

In fact, one of the biggest challenges for mulberry farmers is spacing trees correctly because of their size, Courchesne said. Even the trees at Frog Hollow are crowding one another for light. After trimming, they stand about 18 feet tall and 15 feet wide.

“Harvest ends in late June. By mid-July or early August, we’re out there pruning those trees,” Courchesne said.

The farm has been growing mulberries for six years and is still refining its methods, he said.

“Nobody has written a handbook on this, and neither have we,” Courchesne said.

During the first year the farm grew mulberries, he figured out that the fruit would fall off the tree as soon as it was ripe.

“So there’s your answer: You don’t need to pick them, just let them fall,” Courchesne said. “But if you’re gonna let them fall, you have to catch them.”

Courchesne said the farm has designed “a very elaborate system of nets” that are installed under the mulberry trees during the picking season.

During the height of the season, a “mulberry crew” of about eight to 10 people will gather the fruit daily. The berries are picked off the nets, one by one, and immediately placed in retail packaging, there in the orchard.

“They send a cold, refrigerated truck to pick them up two or three times a week,” Courchesne said.

Frog Hollow Farm takes the remaining mulberries to a farmers market or sends them to its customers as part of its community supported agriculture network. The fresh mulberries they sell go for about $7 for 5 ounces.

While mulberries are not widely sold at grocery stores in the United States, they are more easily purchased in other countries.

“When I was in Thailand, fresh mulberries were very common in local, community-based, markets, but the U.S. is sadly not set up in that fashion,” said Mark Travis over email. He’s a mulberry expert based in Gainesville, Florida, and the creator of the Growing Mulberry website.

Travis said that based on his experiences, the berries that arrived at the markets in Thailand were “very fresh.”

“They do have larger markets that sell an array of packaged goods, but smaller markets and produce stands are extremely plentiful,” he said.

Why can’t we have mulberry products?

So now we know why fresh mulberries are largely absent at our markets. However, Travis raises an interesting point: Why don’t we have more frozen mulberries? Or even dried mulberries or mulberry-based beverages?

Even if you end up drying or freezing mulberries, harvesting the fruit will still be difficult because they’re so fragile, Courchesne of Frog Hollow Farm said.

Miguel Gómez, a food marketing professor at Cornell University, also pointed out not many consumers are familiar with mulberries.

Fruits like blueberries or strawberries, which are easier and cheaper to produce in larger quantities, are readily available, he said.

It’s kind of like a chicken-and-egg scenario, Gómez said. The demand for mulberries isn’t high enough for farmers to justify producing large-enough quantities of the fruit to sell in stores, but perhaps the demand isn’t high enough because they aren’t produced and sold in large enough amounts to become well-known among the public.

The popularity of a fruit or vegetable isn’t always organic — take pomegranates and kale. Gómez said that clever marketers saw their potential and invested a lot of time and money to educate consumers about their benefits and different ways to consume them.

Gómez said it will take an “entrepreneurial mindset” to develop the market for mulberries, but he thinks consumers would love them if they were more readily available — whether fresh, dried, processed or frozen.

Doolin of Lakeland, Florida, thinks people are starting to appreciate the mulberry.

“It’s had a bad rap. For years, it was like, ‘Oh, don’t plant those weeds,’” Doolin said. “I think word’s getting out about how delicious this fruit really is, and how easy it is to grow.”

Just make sure to eat them fresh.