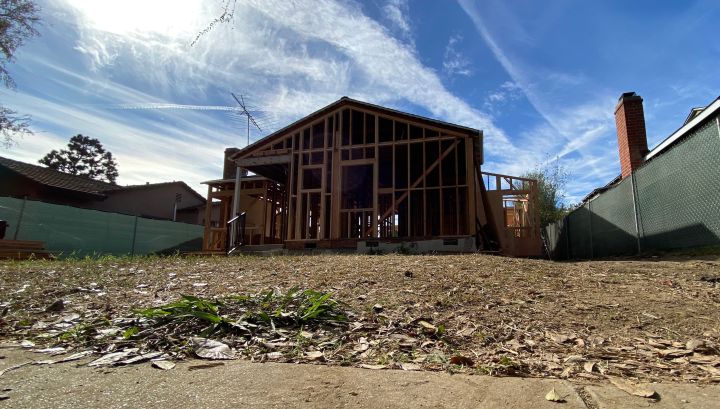 COPY
"It's a very tricky thing because the builders are trying to drum up demand, while also trying to keep their buyers in backlog — those that have already signed a contract — happy," says Ali Wolf, chief economist at Zonda. Chris Delmas/AFP via Getty Images

"It's a very tricky thing because the builders are trying to drum up demand, while also trying to keep their buyers in backlog — those that have already signed a contract — happy," says Ali Wolf, chief economist at Zonda. Chris Delmas/AFP via Getty Images
Listen Now

Mortgage rates are on the rise; the average interest rate on a 30-year fixed mortgage is just over 5.5%, according to Freddie Mac.

Consumer prices rose more than 9% in June from a year earlier, the Bureau of Labor Statistics reported Wednesday. That almost guarantees a big rate increase from the Federal Reserve later this month, and that, in turn, could drive mortgage rates even higher.

Ali Wolf, chief economist at Zonda, spoke to “Marketplace” host Amy Scott about what rising interest rates mean for homebuilders and prospective buyers. The following is an edited transcript of their conversation.

Ali Wolf: I think that the most important thing to keep in mind is that housing has been and always will be an interest-rate sensitive industry. So as we’ve seen interest rates go up, borrowing costs go up, we’ve seen consumers react the way you would imagine, which is they’ve been slowing demand and slowing their desire for homes because of how expensive housing has become.

Amy Scott: You talk to builders, you know, constantly, and I’ve seen some of your tweets. They’ve used words like “evaporate” to describe what’s happened with their markets. How much has their business shifted?

Wolf: It’s a really interesting question, because we know that the monthly payment for a mortgage has gone up 40% since the beginning of the year. So it’s clearly a lot more expensive to buy a home. What a lot of builders say is that people still so desperately want to purchase, it’s just that the market has become so difficult financially. But also, there’s a lot of economic and financial uncertainty out there. And so a lot of consumers have just stepped out.

Scott: Are you seeing prices drop? Are builders actually cutting their prices and offering other incentives, the kind of thing that was kind of unheard of a few months ago?

Wolf: This is a very complicated question. I know it sounds simple, but the reason I say that is, typically, the last thing a builder wants to do is cut their prices. So it’s a very tricky thing because the builders are trying to drum up demand, while also trying to keep their buyers in backlog — those that have already signed a contract — happy. But to directly answer your question, 11% of builders have, at this point, dropped their prices. Seventy percent of builders, according to our data at Zonda, kept prices flat in June compared to May — but again, 11% dropped their prices.

Scott: I wonder, though, what this slowdown could mean for the underlying housing shortage? You know, if building slows down, do we find ourselves right back where we started when demand comes back and there just aren’t enough houses for the people who want them?

Wolf: The answer is yes. I think the most simple way to think about the market is when sales slow, housing starts will slow as well. And this is for two main reasons. Reason one is if a builder is already having a hard time selling all of the homes that they have built today, why are they going to build more homes that maybe they may struggle to sell? And then secondarily, if you’re a lender, do you want to lend to builders to build homes in an uncertain market? So you have a couple of those factors that will keep housing starts compressed until we see the market turn around. But the undersupply of the market can shift on a dime. Housing inventory is undersupplied long term, and I would say structurally undersupplied.

Scott: What should we keep in mind as we see, you know, the potential for more rate hikes coming from the Fed and a housing market that is getting maybe back to something more like normal?

Wolf: There’s a lot of hope that the housing market slows. And I would say that hope comes from potential buyers, that hope comes from policymakers just trying to get housing less feverish, and we’ve absolutely seen that. But I also don’t want to discount the ripple effect of what a slowing housing market can mean to the wider economy. We’ve already seen loan officers, mortgage companies cut staff. Some builders have already cut staff. When consumers aren’t buying homes as quickly, there’s less spending elsewhere in the economy. And you’re gonna see some businesses cutting costs. So slowing housing does not just stop at the point of sale; that can spread into slowing overall economic growth as well.