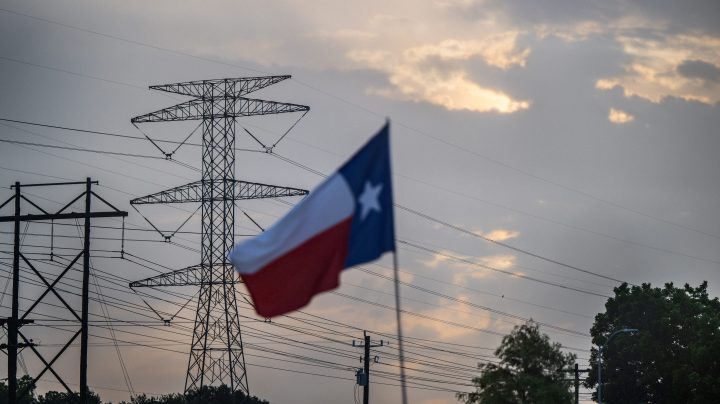 COPY
With temperatures in the triple digits across the state, the Electric Reliability Council of Texas is urging customers to conserve energy when possible. Brandon Bell/Getty Images

With temperatures in the triple digits across the state, the Electric Reliability Council of Texas is urging customers to conserve energy when possible. Brandon Bell/Getty Images
Listen Now

It’s hot in Texas. Triple-digit highs in much of the state have folks running their air conditioners.

On Sunday night, the Electric Reliability Council of Texas — the power grid operator there — sent an email to some Texans and Texas businesses asking them to voluntarily conserve electricity Monday between 2-8 p.m. That’s the hottest time of the day.

So what’s up with the Texas grid, which was supposed to be getting fixed after the terrible outages last year?

Demand on Monday is driven by residential air conditioning, said Joshua Rhodes, a research associate at the University of Texas at Austin.

“That’s going to be the biggest load on the system is everyone’s homes, individual air conditioners, adding up to a massive amount of electricity demand,” he said.

He said that’s why ERCOT sent out those emails asking people to use less.

Doug Lewin, president of Stoic Energy, said those emails highlight a problem with the way ERCOT runs the grid. What’s needed, he said, is demand flexibility.

“In our system, right now, what we have is a system where the grid operator puts out — and I’m using their word — an appeal, a conservation appeal with a capital C and a capital A like, ‘Pretty please, we’re appealing to you to turn down your thermostat,’” Lewin said.

And ERCOT might even get the opposite reaction from some folks who went days without power during the winter storm in February last year, said Caitlin Smith at Jupiter Power.

“A lot of consumers had this very terrible experience,” Smith said. “And I think you even run the risk of people saying, ‘No, we don’t want to help you,’ right? I think that’s a risk they’re running right now.”

Some cities and electricity providers in Texas pay customers to use less energy. Austin Energy gives some people, for instance, rebate incentives to minimize how much AC they use this summer in times of peak demand. But that’s not true everywhere.

“In most of the rest of the state, we don’t,” said Daniel Cohan, who teaches environmental engineering at Rice University in Houston. “Most of us are paying fixed rates for electricity where we don’t have the financial incentive to shift when we use power.”

He said another problem facing Texas is that a lot of power is being generated far from where it’s consumed. We need more infrastructure, he said, to get power from solar plants in West Texas and wind farms in South Texas to homes hundreds of miles away in Houston and Dallas.